Farmers Move To Document And Secure Their Farmlands 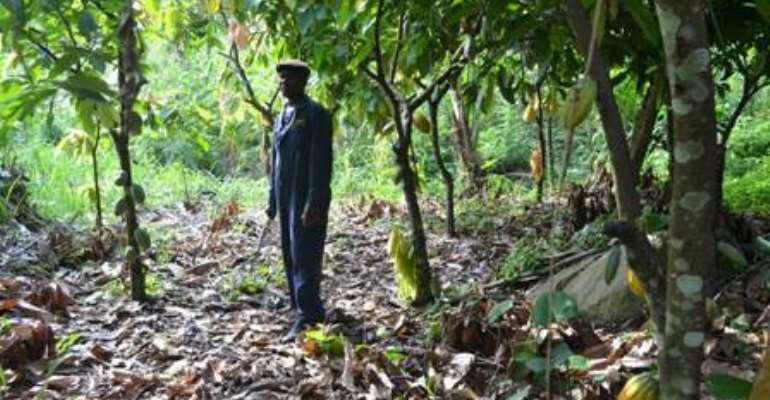 The assistance include; documentation of their farmlands and the rehabilitatation old cocoa farms.

The land documentation, does not include any new development, but only indicate guidelines that already exist between the land owners and tenants.

In all, 70 women representing 36.8 per cent and 120 men representing 63.2 per cent were selected from Nyame Nnae, in the Western region to benefit from the ten months project that was piloted in the community.

Handling over the documents to the beneficiaries, Dr. Yaw Adarkwah- Antwi, team leader of the project in Ghana, said the main objectives of the project was to look into a cost effective way of documenting land agreements and also consider a financial model for helping to rehabilitate cocoa farms in the beneficiary community.

He said part of the project was to investigate government-private partnership to help smallholder cocoa farmers in the country, increase tenure security, replant old cocoa farms, increase yields and productivity as well as reduce deforestation and degradation.

Dr Adarkwah-Antwi explained that for the documentation of lands and rehabilitation of old cocoa farms, which initially involved ten farms, all the other people who participated voluntarily presented their lands and farms for the exercise.

He said some were willing to avail more farm lands but due to inadequate funds they limited everyone to just one farm, explaining that with the 'Abunu' arrangement for instance, it was possible that a farmer may want to rehabilitate his farms, but the land owner's family will object to it.

He noted that such misunderstandings were happening because there were no written down documents at the time the parties entered into the agreements and documenting and writing down what exactly are the rights and obligations of the land owners and tenants would increase productivity and reduce the hurdles between them.

Dr Adarkwah-Antwi added that "We have a survey plan attached to the document, so if someone removes your boundary plan it is easy for a trained beneficiary to use that plan to come back and establish the boundary' and cautioned the beneficiaries not to use the 'land paper documentation' advantage to create confusion between them and their land owners.

The acting chief and Ankobeahene of Asankragwa, Nana Kwesi Addae, who chaired the function thanked the farmers and land owners for cooperating with the organisers to end the project successfully.

He urged the farmers to adhere strictly to what the document contained and live harmoniously with their land owners and appealed to the project managers to extend their project to other communities in the district.

Nana Agyekum chief of Nyame Nnae thanked the project managers for the programme and appealed to men and land owners to give lands to more women in the area since they contributed a lot to cocoa farming in the area,

Mr Tawiah Kwarteng representative of Hershey in Ghana in a speech read on his behalf urged cocoa farmers to venture into the cultivation of other crops and fish and livestock farming as that would make them stay in business all time.

Madam Vida Afi, a beneficiary expressed appreciation to the sponsors for introducing the programme in their community to ensure some on security their farming activities.

The aim of the 'Improving Tenure Security to Support Sustainable cocoa project' is to ensure the continuous growth and production of quality cocoa beans to feed the cocoa industry in the USA in particular.