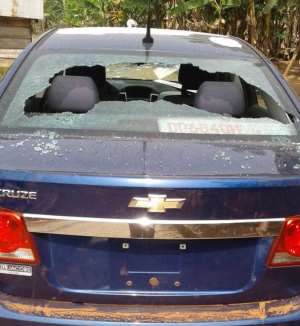 The gunmen, who were armed with a local pistol and machetes, went berserk when they stormed the residence of the lawmaker, who was entertaining visitors in his constituency around 9am.

According to an eyewitness, Kofi Amoah, the unknown men destroyed seven vehicles including a Land Cruiser with registration number GT 9449 -14 belonging to the legislator. The other vehicles include a Nissan pick-up, three taxi cabs and two private cars.

“We managed to bolt into the MPs house and thankfully everyone was safe indoors. They pelted stones at the vehicles and smashed some while destroying his sliding doors and windows too. They were young men between ages 24-35 years,” Amoah told Starrfmonline.com.

The police and officials of the Bureau of National Investigations (BNI) have visited the scene to start investigation into the case.