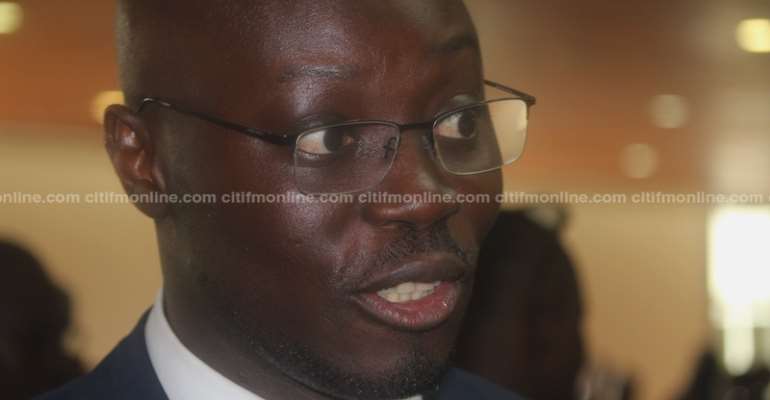 After the approval of the 2018 Budget Statement, which the Minority in Parliament abstained from voting due to the legal breaches, Parliament is now at the crucial stage of reviewing how the 2017 Expenditure Allocations were spent, and debating the 2018 Expenditure Estimates for Ministries, Departments and Agencies (MDAs).

Some critical issues have emerged in the course of the review and debate that the Minority will like to bring to the attention of Ghanaians in the spirit of engaging, informing, and educating them against the background of “Protecting the Public Purse” that His Excellency, Nana Addo Dankwa Akufu-Addo has touted himself as a leading crusader of the cause.

The Budgetary Allocation and Wasteful Expenditure at the Office of the President in recent times are now topical.

We would humbly like to ask, on behalf of fellow Ghanaians, what kind of purchases of goods and services will amount to about 72 million new cedis (GHC 72,290,067.94) for the Office of the Chief of Staff and VEEP Secretariat within 9 months?

Putting this in proper perspective, the immediate effect of the wasteful expenditure at the Presidency is that key growth sectors are denied resources to spur economic growth and development

Table 1: 2018 budget estimates for Office of the President

The total capital expenditure of 72.8 million new cedis for the Ministry of Education (GHC 12.8 million) and Ministry of Water Resources and Sanitation (GHC 60 million) does not add up to the cost of renovating the Flagstaff House and the Peduase Lodge (100 million new cedis (GHC 100,000,000). We, therefore, ask: what are the priorities of the current government? Is it the renovation of the Flagstaff House and the Peduase Lodge or the construction of educational infrastructure for the over-crowded Senior High Schools.

The points made are illustrated graphically below. 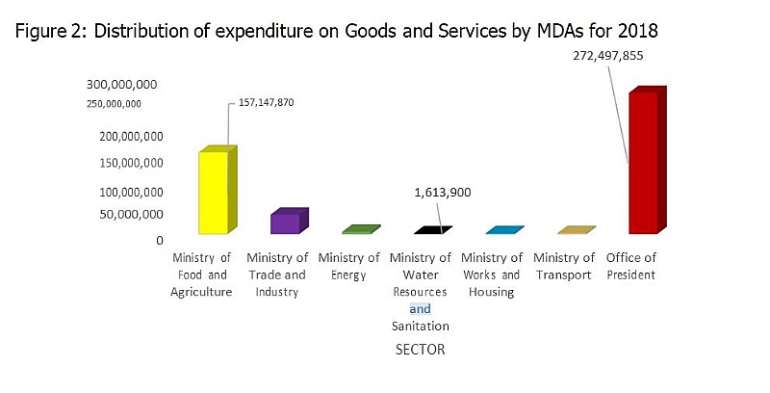 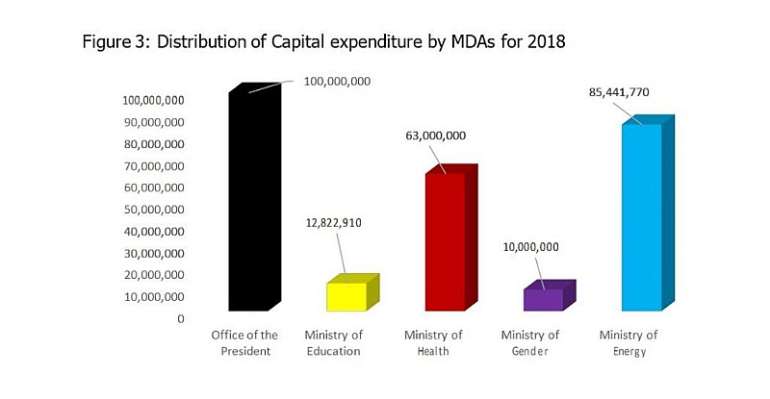 Mr. President, the good people of Ghana strongly opposed the creation of some of your Ministries but you decided to ignore the call from the very people who elevated you to occupy the Number One Office of the Land. You also ignored the fiscal impact of the creation of these Ministries. The 2017 and 2018 Budget figures give credence to this stance by the good people of Ghana.

Even with a casual look at Table 1 below, one cannot help but marvel at the unnecessary and over-bloated expenditure allocations to the Ministry of Special Initiatives as discussed below.

Table 2 below, which is also part of the expenditure allocations for the Ministry of Special Initiatives suggests that the purpose for the $1 million per constitution policy initiative has outlived its usefulness. The VEEP made it clear to Ghanaians that the purpose of the initiative was to encourage a bottom-up approach to development by involving the constituents (grassroots) in the determination of their developmental needs. By the table below, the views and voices of the people are ignored in determining their priority projects

It is quite obvious from Table 2 that some constituencies may not benefit from some of the projects and there is no criteria to determine the distribution of the benefits. This can be very problematic.

Lastly, the list of projects in Table 2, portrays the duplication of work of traditional MDAs like the NDPC, MOH, MoF, etc. etc.