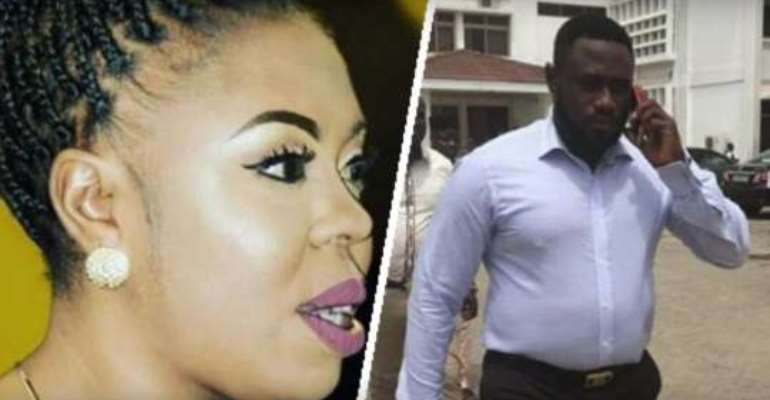 Prosecution have preferred new charges against Lawrence Abrokwa, the husband of Afia Schwarzenegger when he appeared before an Accra Circuit Court.

He has pleaded not guilty and the court presided over by Mrs Abena Oppong Adjin Doku asked Abrokwa to be on his former bail that is GH¢20,000.00-bail with three sureties, who should be gainfully employed.

The matter has been adjourned to January 16, next year.

Prosecuting Maxwell Oppong informed the court that the Police would like to amend the charge sheet and the court obliged them.

Earlier Abrokwa was charged with two counts of domestic violence, threat of harm, publication of obscene material and assault

The Prosecution had at an earlier sitting told the Court that the complainant, Afia Schwarzenegger, and Abrokwa were legally married and lived together at Dome Pillar Two, a suburb of Accra, in a house belonging to the complainant.

According to the Prosecution, about three weeks before the domestic violence incident, Abrokwa packed his things and left the house for Dansoman, following persistent misunderstanding between them.

However, on August 29, this year, Abrokwa was informed by their house help, one Afia Nyamekye, that her mistress had a male visitor who would be spending the night with her.

The Prosecution said based on this information, Abrokwa armed himself with a kitchen knife and a bottle containing some liquid purported to be acid.

The prosecutor said Abrokwa proceeded to the house of the complainant, scaled the wall and entered the compound.

The accused found a strange private car, which he believed to belong to the visitor parked on the compound so he deflated two of its tyres, and entered the house through the back door, with the assistance of the house help.

The Prosecution said Abrokwa threatened them to stay put as he had found them for him to film them otherwise he would pour acid on them to cause harm to their bodies.

Chief Inspector Oppong stated that the male visitor managed to escape during the confrontation, but Afia was prevented by Abrokwa, who ordered her to go on her knees, declaring that she was a prostitute, while he held the bottle of the alleged acid in his hand.

Afia obliged to his instructions, while Abrokwa continued filming the complainant in her nudity amidst pleas from her to stop the filming.

The Prosecution said in the process, Abrokwa assaulted Afia and chased her out of the house.

Afia run to a neighbour, who eventually rescued and clothed her.

After the incident, the Prosecution said Abrokwa transmitted the nude video of his wife to his second mobile phone before reporting the matter to the Police with all the items belonging to the visitor and the first phone used in for filming the incident.

When the complainant went to the house later, she realised that her bedside drawer had been forced opened and 2,000 dollars and 500 pounds had been taken by the accused.

Complainant reported the matter to the Police and Abrokwa was cautioned and granted bail later.

According to Prosecution, whilst the case was being investigated, Abrokwa transmitted the video from his phone to Afia's father on his phone on September 1, this year.

The video, however, went viral on social media and the bottle containing the said acid was sent to the Ghana Standard Authority (GSA) for examination.

On September 13, this year, the Prosecution said the Police received a report from the GSA that the content in the bottle was water and not acid.