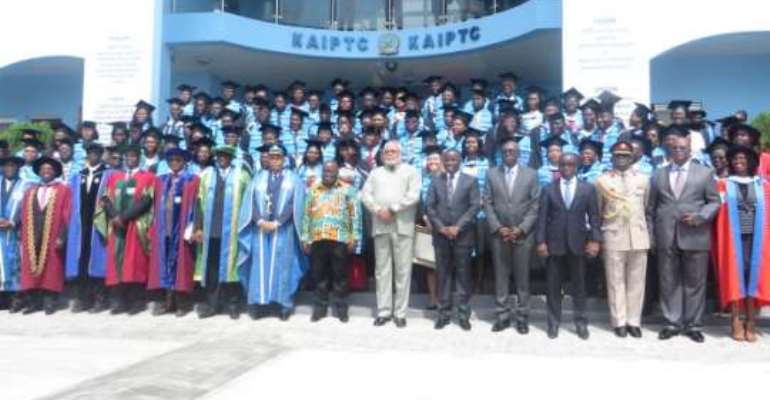 He said by making excellence their habit, they would grow their influence and then, they would be able to make the needed impact in society.

"The Centre has given you knowledge, if this is not combined with wisdom, you will make no impact on society, let alone your country.

President Nana Addo Dankwa Akufo-Addo was the special guest of honour at the graduation.

Others were Professor Philip Ebow Bondzi-Simpson, Rector, Ghana Institute of Management and Public Administration, Service Commanders, and members of the diplomatic community.

Air Vice Marshall Evans noted that, the KAIPTC was committed to offering academic programmes and training courses aimed at building the needed human capacity in the field of governance, conflict prevention, management and post-conflict reconstruction.

"We are resolute about investing in the future, a future of peace, human security, stability and development," he added.

Mr Bill Rammel, the Vice Chancellor/Chief Executive, University of Bedfordshire, United Kingdom, said the presence of the UN had reduced the likelihood and frequency of conflict around the world.

"And I am proud to say both Ghana and the UK deploy a significant number of personnel on UN Peacekeeping operations showing a commitment to the UN's Peacekeeping Mission," he said.

At the function, a six-member team of distinguished personalities was outdoored as KAIPTC Goodwill Ambassadors.

They are Dr Mary Chinery-Hesse, former Member of the African Panel of the Wise and former Chief Advisor to former President John Agyekum Kufuor, Dr Mohammed Ibn Chambas, the Special Representative of the United Nations Secretary-General and the Head of the UN Office for West Africa and the Sahel.

The KAIPTC has instituted the "Goodwill Ambassadors" to support its management in strategic thinking and resource mobilisation from corporate and other international funding sources.