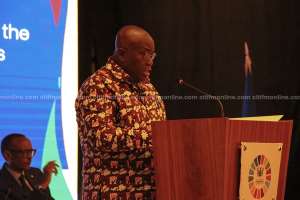 President Nana Addo Dankwa Akufo-Addo believes he has performed impressively in his first year in office. According to him, his efforts over the period have yielded positive results that will create more jobs for Ghanaians in the future.

Nana Akufo-Addo made the statement in an address of the Chief and people of New Juaben on Friday as part of his tour of the Eastern Region.

He said more unemployed youth in the country will from 2018 be employed through various programs initiated under his tenure due to the solid foundation laid by the government over the last 12 months.

“I will not boast, but I know I have really done well in my first year of office,” Akufo-Addo said.

He also said his critics have been shamed by his impressive work.

“Those who spread falsehood and criticized my promises are now ashamed, they have even refused to congratulate me for the work I have done so far and on delivering on my promise…. We have laid a solid foundation in our first year of office in the field of agriculture, infrastructure, education and health, the foundation has been laid for the taking off of our country and next year is going to be about jobs,” he said.

“Parliament today [Friday] passed the second budget of my presidency, a solid and good budget which we will use to work to improve the economy. We are putting the woeful economy left by the previous government on track within our first year, all economic indicators are going in the right direction, deficit, inflation, interest rates and that is the foundation am talking about,” he added.

Foundation created for jobs
The President had said earlier that the government has put structures in place to ensure that the country's unemployment challenges are addressed.

According to Nana Addo, despite inheriting an economy in dire straits, the New Patriotic Party (NPP) administration has worked assiduously towards ensuring that job opportunities are created for Ghanaians.

“We've had important challenges; Invincible and Delta Forces and the tensions at the grassroots of the party over jobs. I appreciate very much the anxiety over jobs. What I'm saying is that, the foundation has been laid for jobs. It has not been easy because we inherited a bankrupt economy, but because of the ingenuity of the people I'm working with, we've been able to lay a good foundation,” the President said.

Meanwhile the National Organiser of the opposition National Democratic Congress (NDC), Kofi Adams believes President Akufo-Addo's performance as president over the past year is far below expectation.