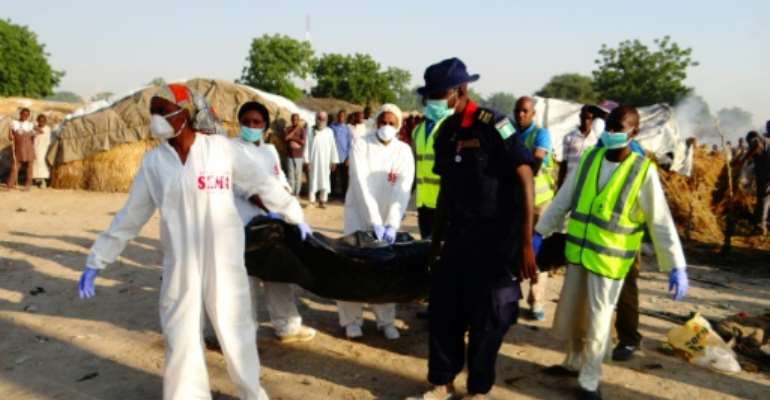 A surge in Boko Haram attacks in Nigeria's restive northeast despite a sustained military offensive against the jihadists is being driven by a need to replenish food and weapon supplies, security and local sources say.

In recent months, fighters from two of the main factions of the hardline Islamist group, led respectively by Abubakar Shekau and Abu Mus'ab Al-Barnawi, have launched attacks on troops, hit-and-run raids and suicide bombings in towns and villages across the region.

The upsurge followed a relative lull after months of military offensives against the insurgents which saw them routed from their strongholds, prompting the government to declare them a spent force.

"The increased Boko Haram attacks are in desperate response to the ongoing military operations that have cut off the terrorists' supply lines for food, weapons and ammunitions," a senior military officer involved in the operation in Maiduguri, capital of Borno state, told AFP.

"They are fighting back to secure these essential items they so desperately need because they know they will die whichever way, as hunger is a silent killer," said the army officer, who asked not to be identified by name because he was not authorised to speak to the media.

"No doubt Boko Haram (fighters) are starving and are desperately in search of food," agreed Mamman Sani, a fisherman in the town of Baga on the shores of Lake Chad.

"They are attacking military locations for weapons and raiding villages for food," he added.

In the latest such attacks, on December 13, fighters from the Barnawi faction, which has the backing of the Islamic State group, made a failed attempt to take over a military base in Mainok, a village outside Maiduguri, though they succeeded in seizing four vehicles, two of them armoured.

On November 21, a Boko Haram suicide bomber blew himself up at a mosque in Mubi in neighbouring Adamawa state, killing at least 50 worshippers.

And this month, two suicide bombers killed at least 13 people and injured more than 50 in Biu, a town about 185 kilometres south of Maiduguri.

Worried by the increased attacks, Nigeria's military authorities replaced the army commander in charge of the counter-insurgency operation in the region.

"The terrorists are attacking military locations, particularly those with few troops, to cart away equipment, instill fear and bolster their capabilities," said a local militia member who is assisting the military in the fight against the jihadists.

He said that on December 10, Shekau, the shadowy leader of Boko Haram's other main faction and the former deputy of the group's founder, led about 400 fighters in an attack on a military post in Bita, a village near the border with Cameroon.

He said the jihadists forced the troops to withdraw before hauling away weapons and heading back to their nearby sanctuary in the Sambisa forest -- an area which the military claimed had been seized in December last year.

The eight-year Boko Haram insurgency has killed 20,000 people and forced 2.6 million out of the homes, prompting a humanitarian crisis in the region.

The violence has also taken a heavy toll on a military already overstretched by unrest in Nigeria's oil-producing region along with efforts to halt clashes between farmers and herders, as well as by peacekeeping operations elsewhere in Africa.

On December 4, the two Boko Haram factions met in Duguri on Lake Chad to discuss a truce after days of clashes in the Dikwa area in northern Borno, according to sources close to the negotiation.

The two sides agreed to forge a common front against the military, the sources added.

But the peace talks collapsed days later after the killing of 18 members of Barnawi's faction by Shekau's fighters.

The two sides have been locked in confrontation since August last year, when the Islamic State said it had replaced Shekau with Barnawi, the 23-year old son of the group's founder, Mohammed Yusuf.

"The two sides are back to the trenches and internecine fighting has resumed between them," a source with deep knowledge of the matter.

"Had the truce succeeded it would have signalled increased collaboration between the two factions, which could have led to increased bold attacks on troop locations with attendant consequences", a military source added.

“Ballots without Bullets” Campaign out doored to intensify p...
2 minutes ago