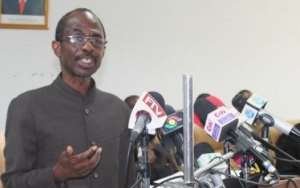 The General Secretary of the opposition National Democratic Congress (NDC), Johnson Asiedu Nketia, has said that the party will sanction aspiring Members of Parliament who sabotage sitting MPs in their quest to capture their seats.

According to him, some aspirants are taking advantage of the absence of NDC MPs in their constituencies, to court disaffection for them.

Addressing the press on the party’s Electoral timetable on Thursday, Mr. Nketia said although the party encourages competition, it will not countenance indiscipline from its ranks.

“The party is aware that even as they spend time undertaking this difficult task in Parliament, individuals have already taken advantage of their absence in the constituency to undermine them with the hope of unseating them in 2020…”

“I wish on behalf of the party to indicate that, while we accept the right of NDC members to aspire to any positions of the party including Member of Parliament, we send a note of caution to all aspirants at all levels to refrain from any act or conduct calculated to undermine our sitting members of parliament before the season for campaigning is formally opened,” he said.

The NDC is undertaking series of activities as part of what it terms of a healing and re-conciliatory process to prepare it for electoral victory in the next general elections in 2020.

Some of the recent activities include series of peace walks led by former president, John Mahama, and a re-registration of members of the party.

Johnson Asiedu Nketia has said that the NDC is ready to take over power from the governing New Patriotic Party (NPP), following the latter’s poor show of leadership and good governance of the country since it won the 2016 general elections.