Zuma and Ramaphosa face battle of wills over S.Africa's future 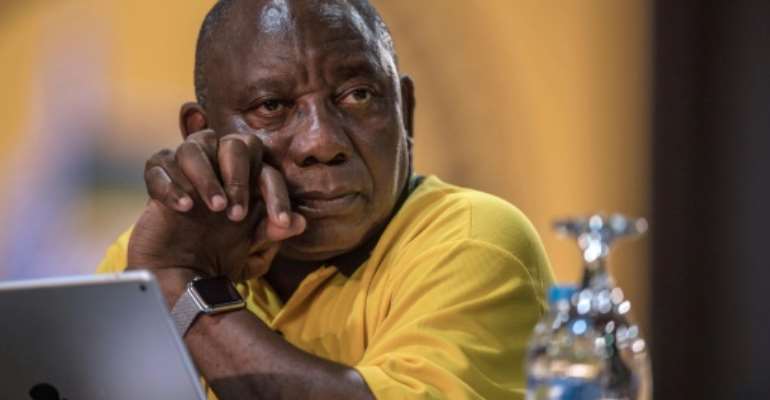 South Africa's Deputy President Cyril Ramaphosa wrapped up Thursday the party conference that elected him ANC leader, with a vow to stamp out corruption in the organisation and in government.

But the result of the party's other leadership races will mean that even if Ramaphosa becomes president in 2019, he will have to share power with the party faction that opposed his leadership bid.

And in the meantime, President Jacob Zuma remains head of state, limiting Ramaphosa's room for manoeuver.

Even though Zuma and Ramaphosa presented an amiable front to the world during the conference, relations between the two remain badly strained.

During the long and frequently acrimonious campaign, Ramaphosa regularly denounced corruption at the highest levels of government and argued that the perceptions of graft were tarnishing Nelson Mandela's legacy and eroding the ANC's electoral appeal.

His criticism of alleged official misconduct were seen as attacks on the legacy of Zuma, who has been embroiled in dozens of corruption and cash-for-access scandals.

It also helped to undermine his rival for the party leadership, Nkosazana Dlamini-Zuma, by raising fears that as Zuma's ex-wife she might seek to shield him from prosecution.

In his inaugural speech as leader Ramaphosa did not sidestep criticism of Zuma's eight years as president, though he used guarded language.

"(Leaders') actions should always be a source of pride, and not a cause for embarrassment," he said.

If the ANC has a hope of keeping its absolute majority in general elections due in two years, Ramaphosa will quickly need to address the Zuma situation.

"Given the negative image of the president and the looming 2019 elections, he will have to distance himself," said Victor Magnani, an Africa specialist at the French Institute of International Relations (IFRI).

The constitution states that the president, who is elected by parliamentarians, cannot be recalled once in office, meaning he can be forced out only by a vote of no confidence -- or pressured to resign.

Which leaves the option of resignation. A precedent exists: in 2008 Zuma successfully forced his predecessor Thabo Mbeki to cut short his term by eight months after assuming the party leadership.

This scenario has gained traction in some corners of the ANC in recent days.

Delegates at the conference have spoken out about the risk of having "two centres of power", split between the party and the government.

Fikile Mbalula, the police minister and a Dlamini-Zuma supporter, told the media that any such tensions would be handled by the party's National Executive Committee (NEC).

"The ANC takes decisions and its deployees in government must abide," he said referring to party members appointed to jobs in the executive.

But in the election of NEC members Wednesday, three posts went to Dlamini-Zuma loyalists -- seen as favourable to Zuma himself -- and three to Ramaphosa's camp, including the party leader himself.

Divisions would probably come to a head over any move to recall Zuma before the end of his term.

Battle of the grievances

Even before the end of the conference, backers of the new leader had already begun a campaign to ease Zuma towards the exit.

In its final resolutions, the party agreed to quickly put in place a commission of judicial inquiry to investigate high-level corruption.

The move was a major snub to Zuma, who has stalled for months over demands that he open an inquiry into his ties with the influential Gupta business family, which is accused of influence peddling and misappropriation of public funds with Zuma's blessing.

Three days before the conference a court ordered a judicial inquiry into the alleged "capture" of state influence and spending, to begin within a month.

Zuma suggested that he would appeal the court ruling, a move which some in the ANC would probably consider sufficiently serious defiance to justify a recall or vote of no confidence.

"Zuma may be at a disadvantage, but he will use every weapon in his considerable arsenal to maintain power for as long as possible," said Augustine Booth-Clibborn, an analyst at ARC Risk.

"The fight for South Africa's future will be between the ANC and the government."

That prospect quickly tempered market optimism that a Ramaphosa victory would return political stability to the system.