NDC Must Know That We Are In Power--Enraged Minister Carlos 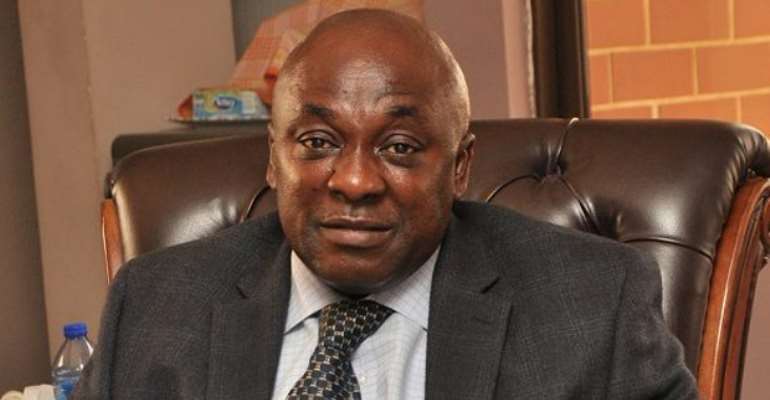 Deputy Trade and Industry Minister, and New Patriotic Party (NPP) Member of Parliament for Tema West, Carlos Ahenkorah, has defended his verbal assault on NDC MP for North Tongu, Samuel Okudzeto Ablakwa, saying “we must let these people understand that we are in power”.

The MP, who had been called on Eyewitness News on Tuesday after a near-fight encounter with the Minority Spokesperson on Foreign Affairs in Parliament, showed no remorse for his conduct, claiming that Okudzeto threw the first punch by tagging his government corrupt, following reports that some expatriates were made to pay between $25,000 and $100,000 to sit close to the President at an awards event.

The allegation was first made by Minority Chief Whip Muntaka Mubarak, who said it was inappropriate. 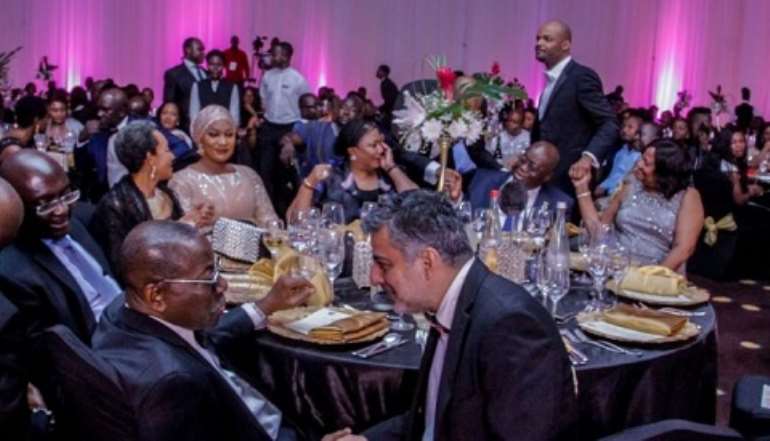 Nana Addo, his vice, 2nd Lady and other guests at the Ghana Expatriate Business Awards event.

The Ministry later issued a statement explaining that, it was only a facilitator of the Ghana Expatriate Business Awards event, and that the Millennium Excellence Foundation, an entity noted for organizing world class events, took the payments.

This was however disputed by the Minority in Parliament, who in a statement issued through Okudzeto Ablakwa, insisted that the Ministry's own letter dated October 23, 2017, confirmed that it went beyond facilitation, to actually collect monies from the expatriates.

It said that letter also directed that interested expatriates were to direct their cheques to the accounts office of the Trade Ministry, although such monies were not accounted for by the Ministry. 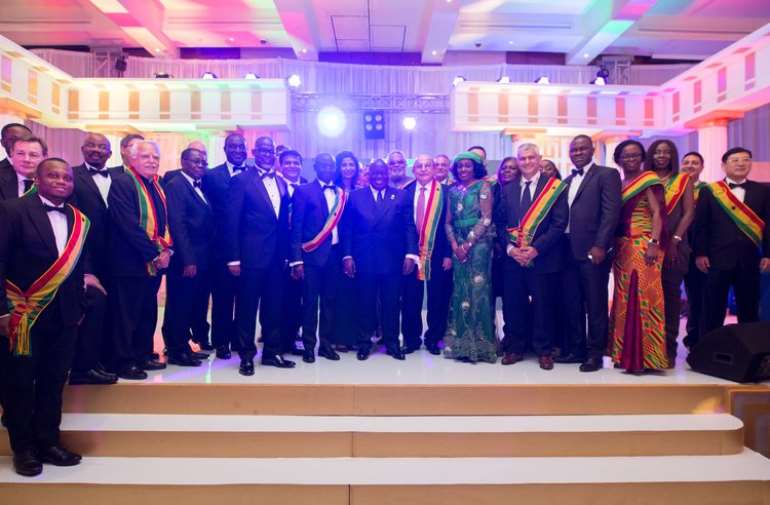 Mr. Ablakwa, who was addressing journalists at Parliament on the matter on Tuesday, was interrupted by the Deputy Trades Minister , who angrily rained insults on him, calling him a “liar” and a “thief” among others.

On Eyewitness News, Umaru Sanda first asked the Deputy Minister, if he did not find his choice of words and conduct dishonourable. He repeated his words, and said he stood by them.

He replied by saying“…Calling me corrupt and describing my person and my activity as corrupt. On the floor of parliament, it's a different ball game. I will not allow anybody to denigrate myself or my ministry or my minister and just go scot-free. If you say that, I have to pay it back to you, especially when these people were in government, they just looking down upon everybody and calling our president names, this time we will not allow” he noted.

“A person like Okudzeto Ablakwa can never ever tag me as corrupt when he himself cannot account for some of his practices when he was in government. And I take serious exception to anybody trying to tag me in that manner. What was so unprintable of the language that I used? I did not say anything that was not true. He is a thief. He took money to go and do Campus Connect” he alleged.

When he was reminded that he could not call someone a thief publicly without evidence, he responded by saying “So calling somebody corrupt without having the basis to call him that is appropriate?”

When he was reminded that two wrongs don't make a right and that he was not supposed to respond in that manner, the Deputy Minister said “I am not paying sin with sin, but it is high time we let these people understand that we are in power. They are not in power. When they were in power, they were doing anything that they wanted. Now at least we have to let them understand that no more, we will not take that thing from them anymore. Just understand me that anything that I said, I chose my words very carefully, and I think that I can stand by it.”

I didn't insult him – Ablakwa insists

Also speaking on Eyewitness News, Mr. Okudzeto Ablakwa said he never used any unprintable language on the MP to warrant the rather harsh reactions that came from him.

“We have put out a statement, and I haven't said anything different from our statement we issued. I have been saying that, you cannot use the office of the President for profiteering; it is unethical and immoral. I have said as the position of the Minority that the fees and charges Act, has been breached. We have said that the sums that have been extorted should be refunded to the expatriates, and we have said that an apology is owed the people of Ghana, and if the President didn't know about this scam, he deserves an apology because his name was used, where you pay 100,000 dollars to sit at his table. This is what I said today; and the Deputy Minister for Trade and Industry, a public official decides to descend on me”.

Carlos wanted to beat me – Ablakwa
According to him “He [Deputy Minister], was so furious and wanted to beat me. He was screaming and using very unprintable language. I mean for an honourable MP and a deputy Minister of state, this is how you think that you can present your side of the story if you think that the facts we are presenting are not right, is that how to go about it? To use insults to denigrate me when we have been engaged in a civil discourse on this matter? He's seeking to claim provocation that he decided to descend into the gutter with me. Every Ghanaian has heard me, and I have been speaking on this matter, I was in no gutter. If he wants to create his gutter and swim in that gutter, he should do it” he opined.

Mr. Ablakwa expressed shock at the Deputy Minister's reminder to him that, they [NPP] are in power, admonishing him to know that power is transient, and that he cannot abuse his office, when he is rather supposed to serve the citizenry.

“These are matters that we will leave it to the people of this country to judge. If you listened to him carefully, his mind-set is that, he must show us that they are now in power and we are in opposition. So it is just show of force and abuse of power. He should just remember that power is very transient; you will not be in power forever, so if you think that you are in power so you must denigrate, intimidate, insult and pour venom on your colleague who's just doing his work as a Member of Parliament. Facts have come to our attention and we are putting it out”.

He reminded that the NPP of their days in opposition, and how critical they were of the then NDC government, saying “You did your work when you were in opposition. Remember when they had concerns about the Ford car scandal, what didn't they say about Mahama? What didn't they do? They summoned Parliament from recess, called Mahama incompetent, corrupt, declared the CHRAJ investigation bogus and all of that. Who insulted them? Who set out to beat them? Speak to the journalists in Parliament, he wanted to get physical, he wanted to beat me up. Does it have to come to that? He tried to beat me up, and I just had to walk away from him because of the respect I have for my constituents” he lamented.

God is my Judge – Ablakwa
Asked whether he may take up the matter further to seek redress, Ablakwa said “I am still thinking about it. I am normally someone who leaves matters into the hands of the Almighty. In my upbringing, I don't believe that you should seek vengeance or try to pay people back or get people to account now. There are always ways by which the Almighty deals with these matters. So don't be surprised if I don't make much of it, and I will not also be intimidated” he noted.

I won't apologize to Ablakwa – Carlos

Asked whether he would apologize to Okudzeto Ablakwa for his comments, Mr. Ahenkorah, who was still fuming after listening to Ablakwa on the other side of the telephone line on the show, insisted that “Ablakwa is a liar. I didn't touch him. Of course, it's the case that when I am arguing under pressure I have to shout. That doesn't mean I am angry. Is he going to apologize to me? He is supposed to apologize to me for calling me corrupt. I was standing there when Okudzeto was raining insults calling us corrupt. If he apologizes to me, I will apologize to him. As I was saying, the Millennium Excellence Foundation has called him [Ablakwa], to tell him that they organized the programme, did the collection, raised the fund and everything, and yet he's still going around peddling lies.”

–
By: Ebenezer Afanyi Dadzie/citifmonline.com/Ghana
The post ‘We must let NDC understand that we're in power’ – Ahenkorah fumes appeared first on Ghana News .