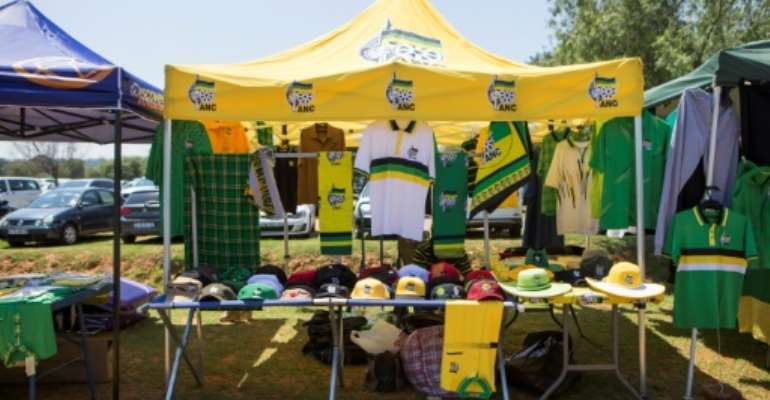 There are more than 4,700 delegates at the ANC conference which is being held just outside Johannesburg. By WIKUS DE WET (AFP)

South Africa's ruling ANC party began voting in the early hours of Monday to choose their next leader after repeated delays to a ballot seen as a key moment in the country's post-apartheid history.

"Voting will go ahead now," the party said in a statement soon after midnight, rapidly reversing a decision to hold the vote on Monday during the day.

On Sunday, rival supporters sang and chanted in the conference hall outside Johannesburg as the vote was pushed back due to disputes over which delegates were qualified to vote.

The only two runners in the tight race are Deputy President Cyril Ramaphosa, a wealthy businessman, and former minister Nkosazana Dlamini-Zuma, who is President Jacob Zuma's ex-wife.

With public support for the ANC falling, the party which has ruled since 1994 when Nelson Mandela won the first multi-racial vote, could struggle to retain its grip on power in the 2019 general election.

The secret late-night ballot by more than 4,700 delegates may lead to multiple challenges and recounts.

Zuma, whose reign has been marred by graft scandals, will step down as ANC chief at the meeting but will remain as head of state ahead of the 2019 vote. 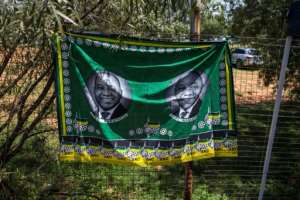 In his farewell address, Zuma appealed for unity in a party riven by bitter factions, and blamed the decline in the ANC's popularity on "perceptions in society that we are soft on corruption, self-serving and arrogant".

"Petty squabbling... needs to take a back seat," he said on Saturday.

"Our people are frustrated when we spend more time fighting among ourselves instead of solving the daily challenges they experience."

But his speech drew only weak applause in sharp contrast with the raucous supporters of those seeking to replace him.

Zuma is seen as backing Dlamini-Zuma, who may protect him from prosecution over graft charges.

Some analysts say the contentious leadership battle could end up splitting the party.

The ANC is still South Africa's biggest party by far, but the 54 percent it won in local elections last year was its worst poll result since 1994.

In opposition, the Democratic Alliance and the Economic Freedom Fighters are hoping to exploit the ANC's woes in the 2019 election, with one possible outcome being a coalition government. 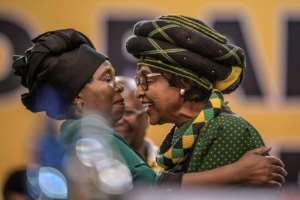 One of the main candidates is Nkosazana Dlamini-Zuma (left), the ex-wife of President Jacob Zuma who is seen here greeting Winnie Mandela, former wife of the late Nelson Mandela

Her critics have warned she will pursue Zuma's failing economic and political policies.

"If Ramaphosa wins, I will not support him. Dlamini-Zuma is the best as she has no scandals. All that is against her is that she is Zuma's ex-wife," said Luthuli Pearl, a delegate from Kwa-Zulu Natal province.

Natalie Gillion, a Ramaphosa supporter from Western Cape, said: "We are here to cleanse the ANC from the corruption that has dirtied our party. We are going to enter a new era with him as our new president."

Ramaphosa received a significant boost over the weekend when he was publicly endorsed by influential ANC chairwoman Baleka Mbete.

Ben Payton, an analyst at the global risk consultancy Verisk Maplecroft, said Ramaphosa was well-positioned for victory but Dlamini-Zuma "remains within touching distance of an upset win".

"The conference provides an opportunity for the party to change direction after eight years in which the economy has flatlined, increasingly extreme rhetoric has scared off investors, and corruption has overwhelmed public finances," he said.