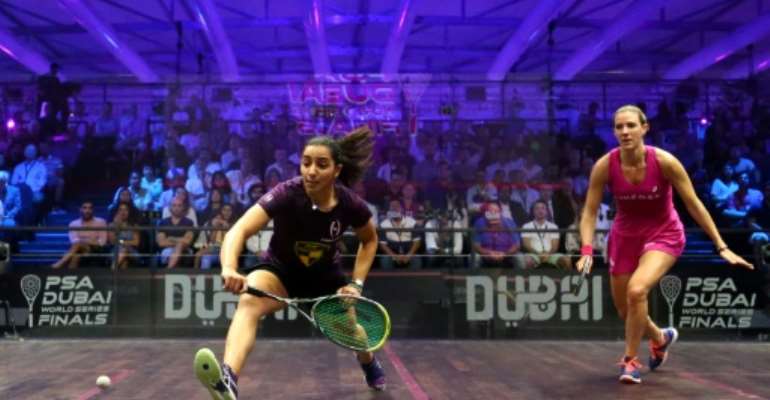 Raneem el-Welily of Egypt (L) plays a backhand to Laura Massaro of Great Britian in the final match of the Dubai PSA World Series Finals squash tournament in Dubai, May 28, 2016. By MARWAN NAAMANI (AFP/File)

Egypt's Raneem El Welily ended a three-year wait for atonement when she won the world title by upsetting her compatriot Nour El Sherbini 3-11, 12-10, 11-7, 11-5 in Sunday's final.

World number two Welily made up for the loss of four match points against Nicol David in the 2014 final in front of her home crowd in Cairo by beating Sherbini, who had been in fine form and was looking to become the first Egyptian to win three successive world squash titles.

Sherbini took the first game and looked likely to take a two-game lead when she took five out of six points and saved a game ball to reach parity at 10-10 in the second game.

But Welily drew leve on games and completed the turnaround by winning the next two to take the title.

"After the first game I began to hit the ball more accurately, not as quick a pace and not as strong, but this still made a huge difference," she said.

"I was able to get in front of Nour and then move her to the front and back again as often as possible."

It was when Welily started to get the feel of the conditions that she showed just how talented a shot-maker she is -- deft with the drop shots, sharp-eyed with the cut-off volleys, and slick-wristed with the disguised drives.

She won the two points from 10-10 in the second game with a lovely forehand drive winner and a brilliant retrieve which lured Sherbini into angling the ball down off a side wall.

In the third game, Welily soon built a 7-3 lead and in the fourth a 6-2 lead, neither of which Sherbini was able to peg back.

It was several minutes before Welily could make her on court speech because of prolonged tears.

But eventually she named all those who had helped her, including husband Tarek Momen who she claimed "is good enough to win the world title too".

Egypt were already certain of winning both titles for the second successive time - with the Elshorbagy brothers, Mohamed and Marwan, contesting the men's final later on Sunday.

It is also the first time that Egypt has simultaneously held both the men's and women's world team titles.

No country has completed such a quartet of world titles before.