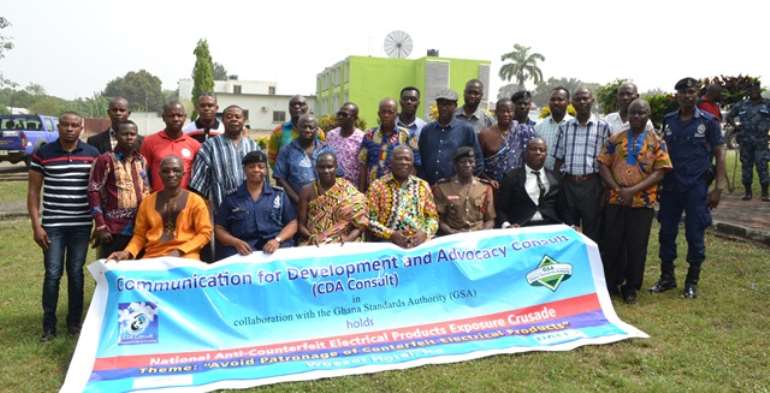 Cross section of the participants

Ho, (V/R), Dec. 14, CDA Consult - Stakeholders in the electrical product business have been challenged to take up the fight to weed out fake dealers in the system to protect lives and businesses.

The illegal practice according the Executive Director of the Communication for Development and Advocacy (CDA), Mr. Francis Ameyibor was dangerous to human lives and served as a major contributor to the many fire outbreaks in the country and therefore required concerted efforts to fight the menace.

The elimination of counterfeit electrical products from the Ghanaian market he said would not only create a bigger market share for genuine dealers, but would also save the nation lots of money that were lost as a result of the effects of these fake gadgets.

Speaking at a public education forum organised by CDA on the theme ‘Avoid patronage of counterfeit electrical products in Ghana’, Mr. Ameyibor stated that counterfeiting was not a Ghanaian problem but a global challenge that resulted in a $600 billion loss worldwide last year.

Every country now according to Mr. Ameyibor was trying to adopt a system to fight this harmful practice and for that matter the perpetrators were moving to areas where the systems were weak to operate.

This therefore calls for stakeholders especially those doing genuine business to collaborate with institutions to tackle the issue in order for them to remain in business and manage fire disasters, he stated.

The issue he advised must be tackled holistically by moving the fight from institutional level to a collective effort to prevent the draining of individual pockets and the nation’s resources.

Giving an overview of the situation in the country, Mr. Ameyibor said although there was no statistic to prove the amount the country loses annually, the prevalence was high as fake electrical products were finding their way into our homes.

Results from a survey conducted in 2013 in the Volta region showed that the biggest damage from these counterfeit products was loss of property.

It is therefore necessary to come together as a team to create awareness and work together to reduce the impact.

Mr. Ameyibor said there were many ways of detecting counterfeit electrical products but the best way was to ask dealers about the genuine ones before purchasing.

"Before you go out to buy electrical gadget, consult. Most electrical dealers are sincere and they will gladly tell you those that are of quality to buy’’.

‘Mostly the fake ones are cheaper but in as much as you want to save money and buy the cheaper products, you are rather endangering your lives and property, he pointed out.

He appealed to the stakeholders not to consider the Ghana Standards Authority as an ‘enemy’ but rather help the institution to play its role well by also contributing to the campaign to strengthen the system against this illegal practice.