Akufo-Addo Has No Interest In EC Bosses' Saga 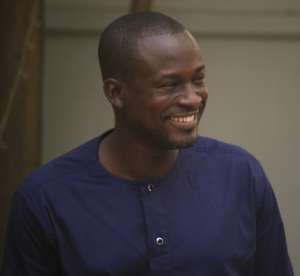 The Director of Communications at the presidency, Eugene Arhin, has rubbished claims suggesting that the New Patriotic Party (NPP) is on a deliberate mission to have the Chairperson of the Electoral Commission , Charlotte Osei removed from office.

In the wake of the establishment of a prima facie case against Mrs. Osei following allegations of corruption and abuse of office leveled against her in two separate petitions, NDC Member of Parliament for Tamale North Constituency, Suhuyini Alhassan, has stated that the governing NPP is on an agenda to dismiss the former.

“Some people in the opposition, when the woman was appointed, vowed and pledged and said they will move heaven and earth to frustrate her and make sure that she doesn't work as the Electoral Commission Chair,” Mr. Alhassan had suggested.

The MP could however not mention the name of a single NPP member or official who made that statement or pledge. Some other NDC members have made similar allegations but without proof.

Speaking on Eyewitness News, the Director of Communications at the presidency, Eugene Arhin, dismissed these claims, saying the President has no interest in replacing the EC Chairperson.

“I am really surprised by the kind of posturing being put up by the leaders of the National Democratic Congress (NDC) and Members of Parliament, and I have said this before, and I will say it again that President Nana Addo has no interest or whatsoever in who becomes the Chairperson of the Electoral Commission. It is none of our business. The most important is we have a mandate to deliver on, and that is the mandate of change the people of Ghana voted precisely for, and that is what we are focusing on. Whoever becomes head of Electoral Commission in all honesty we are not really bothered about that. All that matters is that, we move this country forward.”

Some had suggested that the President's decision to forward the petition to Commission on Human Rights and Administrative Justice, when he could have used his discretion, showed that he was on a deliberate mission to get Mrs. Osei removed.

Mr. Arhin in a sharp rebuttal pooh-poohed these claims, saying the “President had no discretion to exercise” in relation to this petition.

Citing more examples to support his claim, Mr. Arhin sought to find out whether former President John Dramani Mahama exercised his discretion when a petition was filed against the former CHRAJ Commissioner, saying “when a petition was sent to President Mahama with respect to Lauretta Lamptey, did the President have any discretion to exercise? Didn't he follow the laid down procedures as stipulated by the law.”

According to him, it was impossible for President Nana Addo to simply gloss over the issue when Article 146 (3) of the constitution binds him to adhere strictly to the rules and regulations in cases of this nature.

The Petitions
Some staff of the EC petitioned President Nana Addo Dankwa Akufo-Addo in July 2017, to remove Mrs. Osei from office over allegations of fraud and financial malfeasance as well as abuse of office.

The unnamed EC staff are being represented by Lawyer Maxwell Opoku-Agyemang, against Mrs. Osei.

The petition against her, alleged among others the funnelling of GH¢3.9 million to partition an office, the receipt of a Toyota Land Cruiser from the Mahama government, and the use of about $14 million when the Public Procurement Authority had authorized her to use only $7.5 million.

Charlotte Osei takes on Deputies
Mrs. Osei also responded by making allegations of corruption against her deputies, claiming that she was only being hounded because she sought to introduce systems to curb misuse and mismanagement of resources.

Charlotte Osei among other claims, accused deputy Chairperson of the Commission of illegally signing contracts worth over GHC 40 million without her approval.

Fresh impeachment against EC Chair
Subsequently, another individual by name Douglas Seidu, a concerned Ghanaian, also petitioned the President in August 2017, seeking the removal of the EC Chair, on grounds of “financial misconduct, incompetence, conflict of interest, breaches of the public procurement processes, amongst others.

It is an eight-paged petition” according to the Director of Communications at the Presidency, Eugene Arhin, who spoke to Citi News in August.

President Akufo-Addo in accordance with the constitution forwarded both petitions to the Chief Justice to look into the matter.

Suggestions are that both petitions have been consolidated to make the committee's work easier.

How Slain Mfantseman MP Begged Killers To Follow Him Home Fo...
13 minutes ago