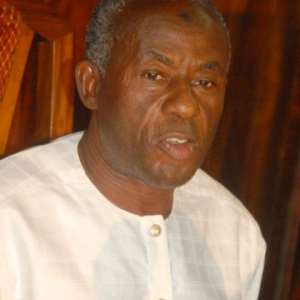 During the consideration by Parliament of the 2018 Budget Estimates for Government Ministries, Departments and Agencies (MDAs) Alhaji Collins Dauda, MP for Asutifi South, could not help reminding the nation to keep its flora and fauna intact.

But Alhaji Dauda, a professional teacher and former Minister for Lands and Natural Resources, in a contribution to the Report of the Finance Committee to approve the budget estimate for the Ministry of Lands and Natural Resources went down memory lane and brought the House to nostalgic moments of the days of yore, when travellers rode through soothing shady trees, which he called 'forests' 'from Bekwai to Kumasi.'

First Deputy Speaker Joseph Osei-Owusu, who chaired proceedings for the day asked the Legislator to tell House when that happened to which he replied when 'we were in Middle School'.

Middle School is an old schooling system in Ghana, covering four years of post primary education, before one entered High School. That was before the era of the full implementation of the Junior High School system in 1987.

Despite being on the Minority Side, the Legislator, who is also a former Minister for Water Resources, Works and Housing, lauded the Majority Government of the New Patriotic Party (NPP) for announcing a programme to plant a total of 30,000 hectares of trees in 2018.

He said the project was ambitious, but however called for its support from both sides of the House to save Ghana's forest cover, which he said was depleting at a very alarming rate.

He cautioned that if the present trend of deforestation continued, Ghana would lose its natural forest cover by the year 2040.

All efforts, Aljaji Dauda said, should be gathered to commit enough resources to the forestation programme despite its seemingly high cost because the benefits to be derived far outweighed the cost.

He urged the Minority Side to hold the Government accountable to commit enough resources for the success of the project.

He called further for early and regular releases by the Ministry of Finance of royalties to traditional authorities who owned lands.

Mr Kwabena Mintah Akandoh, a former Deputy Minister of Lands and Natural Resources, and MP for Juaboso Constituency, wondered why an allocation of GHC8 million for the Ghana Bauxite Authority in the 2018 Budget, when the Authority was yet to be established.

During the consideration of the Finance Committee report to approve the estimate of the Lands and Natural Resources Ministry, other contributors expressed in very strong terms for the nation to have its own soil texting mechanisms, rather than being sent to foreign lands for examination.

With the estimates for the Ministry of Local Government and Rural Development, contributors expressed worry on the chunk of the inflows into that sector from foreign sources against the declaration of President Nana Akufo Addo of a 'Ghana beyond aid.'