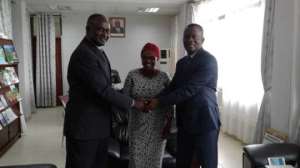 The Environmental Protection Agency (EPA) is exploring collaboration with a top environmental institute and a university in Finland, expected to lead to research and capacity building exchange programmes between Ghana and Finland environmentalists.

The collaboration is also to ensure technology transfer, deepened training and knowledge sharing and policy discussions that would be boost the relations between Ghana and Finland.

It is expected to assist the EPA in transforming its Institute of Environmental Studies, located at Amasaman in the Greater Accra Region, to affiliate with the two institutions, and to get a national accreditation that would enable it to award diploma and degree certificates to its trainees.

The trainees include staff of the Agency and outsiders on the Environmental Impact Assessment (EIA).

A delegation made up of officials of the EPA and Aquaminerals West Africa Limited have, therefore, paid the first working visit to the Finland Environmental Institute and the University of Oulu, Finland, to interact with officials there and discover the opportunities that would accrued for both Ghanaian and Finnish nationals under the collaboration.

This is being led by Aquaminerals West Africa Limited, a joint-venture subsidiary of Finland that provides water treatment solutions in Ghana.

The Finland Environmental Institute is one of the main policy think-tanks on the environment in Europe while the University of Oulu is a leading research-oriented one.

Mr Samuel Owusu-Asare, the Chief Executive Officer of Aquaminerals, at a briefing with officials of the EPA, led by its Executive Director, Mr Peter Abum Sarkodie, said the two institutions abroad were enthusiastic about the agreement and looking forward to further engagements.

He said the University of Oulu, which he represents, was ready to share research findings with the EPA to boost its environmental protection agenda in the country.

EPA is well recognised as one of the formidable environmental institutions in Africa.

Mr Ransford Sekyi, the Acting Director at the Inter-Sectoral Network Division of EPA, who led the Agency's team to visit Finland in July this year, said the collaboration was expected to be cemented further by the Ministry of Environment, Science, Technology and Innovation and the Ministry of Foreign Affairs after officials were able to finalise the agreements.

'We have to now find the modalities to cement this through either the Ministry of Environment or Foreign Affairs,' he said, adding that the interactions would help both sides since Ghana also had some important things to share with Finland.

'So it will be a win-win for both countries,' he said.

Mr Sarkodie, on his part, expressed optimism about the collaboration and said it would enable the EPA to expand and further develop its Environmental Institute that currently award certificates to researchers and scientists who patronised the facility to learn about the environmental impact assessment among other things.

He said by the end of the first quarter of 2018, a team would go back to Finland to deepen and streamline the earlier discussions that would lead to the signing of a memorandum of understanding between EPA and the Finland Institutions.