NPP communicator calls on govt to intervene on Goldfields, Tarkwa Mine’s decision to lay off workers 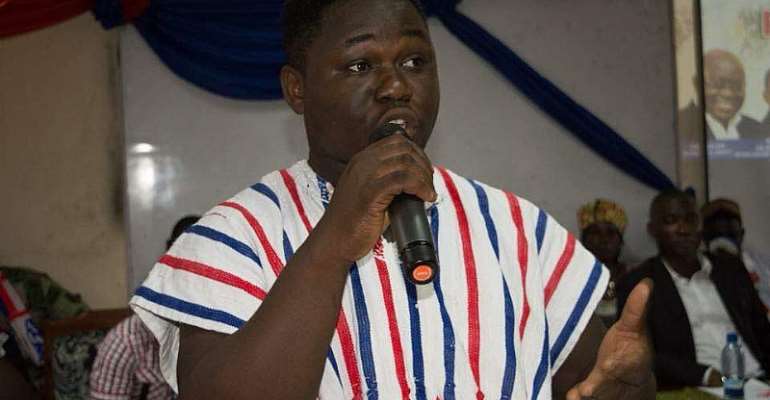 A leading member of the ruling New Patriotic Party (NPP) in the Tarkwa-Nsuaem Constituency of the Western Region, a Former Tescon President of UMaT who is also a Member of the Western Regional NPP Communications Team, Mr. Gomashie Edem Wisdom has called on the government to as a matter of urgency to intervene on the decision of the Goldfields Ghana Limited, Tarkwa Gold Mine have taken to sack over 1,700 Ghanaian workers.

Goldfields Ghana's Vice President and Head of Corporate Affairs Mr. David Johnson confirming the retrenchment exercise to the media, explained that the company has changed its mining model at the mine from owner mining operation to contractor operations, because it will operate at a loss if it goes on with its previous model.

”We are changing our business model from an owner binder to the contract binder, previously Goldfields acquired and maintained the mining fleets. Now what we are doing right now in 2017, our mining fleet has changed and will need to be replaced now looking at the types of mines that we have which is five to six years of active mining, if we were to pump that money into fleet replacement we will not actually be able to recruit that money back because we are talking of a huge capital investment here".

Mr. Gomashie Edem Wisdom, a Mining Engineer in a petition issued on Wednesday December 13, 2017 and copied to the government and other stakeholders indicating that in his singular opinion, "the thematic reasons for which the Goldfields Ghana Limited want to stand on to make a transition from Owner to Contract mining currently is not much convincing on the side of most stakeholders after; the company enjoyed an 11-year Development Agreement signed between Goldfields Ghana and Ghana Government in 2016".

Mr. Gomashie Edem Wisdom was of the view that if the workers of the Goldfields Ghana Limited, Tarkwa Gold Mine and other stakeholders don't sit down with Government and jaw jaw on this delicate matter and not handle well, it will cripple the future of Tarkwa and by extension the Region beyond.

According to him, "Members of the Opposition NDC have started blaming the decision of Goldfields Ghana Limit as the failure of the NPP government which I resist; for the the government to step in fully with immediate effect".

Mr. Edem stated that per the numerous benefits the Goldfields Ghana Limited has and still enjoying, the company should rethink of its decision.

He mentioned these benefits, "The company's corporate tax rate was reduced from a fixed 35% to 32.5%"

"The royalties payment of the company linked to the gold price, a plus to the company as a result of fluctuating Gold price on the world market".

In general view, Goldfields Ghana Limited (GFGL) was incorporated in Ghana in 1993 as the legal entity holding the Tarkwa concession mining rights with Government of Ghana owning just 10% shares.

The Tarkwa Gold Mine operates under seven mining leases covering a total area of approximately 20,825 hectares. The company shares the vision to become the global leader in sustainable gold mining.

Below is the full petition

As a Mining Engineer and a key stakeholder of the mining industry of this country, I have decided to add my voice to the trending issue of Goldfields Ghana Limited, Tarkwa Gold Mine making a transition from owner mining to contract mining which will lead to over 1,700 Ghanaians losing their jobs and hereby petition the government to step in with immediate effect.

1. Is the largest Portfolio among the Goldfields West African Portfolios which employs directly and indirectly about 8,000 Ghanaians and holds the title as the Largest Employer in the Private Sector in Ghana.

2. Is the largest Taxpayer in Ghana for some years now in Ghana and by pouring into the country's coffers an amount of GHc501 million as of 2016, a greater cushion to the management of the country's affairs.

3. Provides infrastructure in areas of corporate social responsibility as part of developing education, health, water and sanitation.
4. Has an enviable record in sustainable community development.

From the above, it is clear to all Ghanaians that, the survival of the Gold Fields Ghana Limited, Tarkwa Gold Mine is very imperative to the;

1. Taxes and Royalties benefits of the state;
2. Survival of the Local Economy of Tarkwa and its environs;
3. Job Security of its employees and by extension a ripple effect on the defendants of the direct and indirect beneficiaries of the company; and

4. Development of the traditional structures of the various stools within the catchment of the company.

Without politicizing the whole issue, first of all, in my singular opinion, the thematic reasons for which the company want to stand on to makes a transition from owner to contract mining currently is not much convincing on the side of most stakeholders after;

1. The company enjoyed an 11-year Development Agreement signed between Goldfields Ghana and Ghana Government in March 2016.
2. The company's corporate tax rate was reduced from a fixed 35% to 32.5%.
3. The royalties payment of the company linked to the gold price, a plus to the company as a result of fluctuating Gold price on the world market.
4. The company received concessions on import and other duties.

All the above powerful incentives to the company just last year opened the gateway to the company to make enough financial savings which became the leverage and framework for revitalizing the Damang Reinvestment which have now made the Damang portfolio, one of the quality assets in the Gold Fields Worldwide portfolio.

Notwithstanding the above, I may not have the legal rights to attack the management of the Gold Fields Ghana Limited on their decision but I don't side with their decision on grounds many other stakeholders deems not properly managed.

Say, every worker has at least 10 dependants and by 1,700 this translates into 17,000 plus Ghanaians that are going to suffer various social-economic backlash when the decision to sack 1,700 is upheld at a time where unemployment is a threat to national security where about 48% of the youth are unemployed as contained in a World Bank Report in 2016.

On this note, It is clear the workers of Goldfields Ghana Limited, Tarkwa Gold Mine and other stakeholders need to sit down and jaw jaw on this delicate matter which if not handled well will cripple the future of Tarkwa and by extension the region beyond , They have to go back to the negotiations table kind courtesy through the efforts of the listening Akuffo-Addo government to restore the glory of Gold Fields and the fate of those who are to be sacked, the outcome should become the fulcrum around which the development of Tarkwa and Ghana can revolve.

Thus, I am calling on all Goldfields workers, Traditional Rulers within Tarkwa, Political Leaders of the Assembly and Constituency to rise up and protect the heritage of Tarkwa and its local economy.

The ambitious 2016 manifesto of the New Patriotic Party which led to the unprecedented victory of Nana Addo Danquah Akuffo-Addo which led to;

5. Giving Tax incentives to companies that employ fresh graduates and have finally reduce corporate taxes to 20% will not be happy to accept such loss of jobs in just one company after all the interventions in place to create more jobs, protect jobs and support growth of businesses at the time the *NPP government* is working assiduously to make the private sector the engine of the nation's growth.

Members of the Opposition NDC have started blaming the decision of Goldfields Ghana Limited as the failure of the NPP government which I resist; for the government to step in fully with immediate effect.

I humbly through this medium petition the office of;

to as a matter of urgency engage themselves by government taking much steps in ensuring the various stakeholders arrive at a more serene decision which represents the vision of the current government by;

1. Placing injunction on the current decision by the management of Goldfields Ghana Limited
2. Ensuring Goldfields Ghana Limited maintains its owner mining status to retain workers and even get incentives to expand operations and employ more to reflect what the NPP government stands for. This will even widen the tax benefits to government to support it generational policies such as;

1. Free SHS
2. NHIS and
3. One District One Factory
among others.

When done, this will become one of the greatest achievements of the NPP and electoral fortunes of the party will be remembered by the beneficiaries of this historic decision.

When done, the local economy of Tarkwa and its environs which is already threatened as a result of ban on small scale mining will not further dwindle.

When done, the royalties to the various traditional councils and stools lands which is already inadequate will be restored with hope with little or no chieftancy disputes.