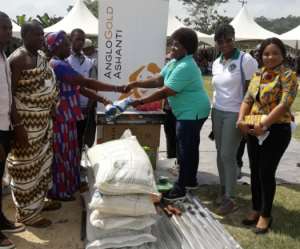 The sponsorship forms part of the AngloGold Ashanti’s support to farmers and to help promote women empowerment in its catchment area. Since inception, more women in the area have ventured into agriculture making the vocation attractive.

Ms. Awo Wugah, a sixty-five (65) year old farmer from Esuaso won first runner-up for contributing towards food security in the Tarkwa Nsuaem Municipality. She also won a variety of gifts including a plasma television set, an orthopedic mattress, sewing machine etc. This is Ms Wugah’s second win as best female farmer. She has been farming for over thirty years and cultivates cocoa, maize, spices, pineapples, cassava, plantain etc.

“Hard work and perseverance are the two pillars that has kept me going, she said, expressing appreciation to the Mine for the honour done her.” Madam Awo Wugah encouraged more women especially the youth to venture into commercial farming as a business since its benefits are rewarding.

At Dumase-Bogoso, Madam Amina Agyimah from Damang, a gold mining community in the Prestea Huni-Valley District won the best female farmer award. She received a plasma television set, wellington boots, bags of NPK fertilizers, wax print, one packet of roofing sheets among others.

“We are thankful to AngloGold Ashanti for sponsoring the best female award category every year. I am proud of the items I have received and in fact, AngloGold Ashanti stood tall among its peers,” Madam Amina Agyimah said.

“Since AngloGold Ashanti’s participation in supporting female farmers in its host communities to , more women in the area have taken inventured into agriculture making the vocation attractive and as a mine that believes in empowering women, we will continue to support this noble cause” he added.

National Farmers' Day is commemorated each year to honour Ghanaian farmers and fishermen. The occasion is also used to acknowledge the vital role farmers and fishermen play in the nation's socio-economic development. This year’s celebration was under the theme, Farming for food and Jobs. 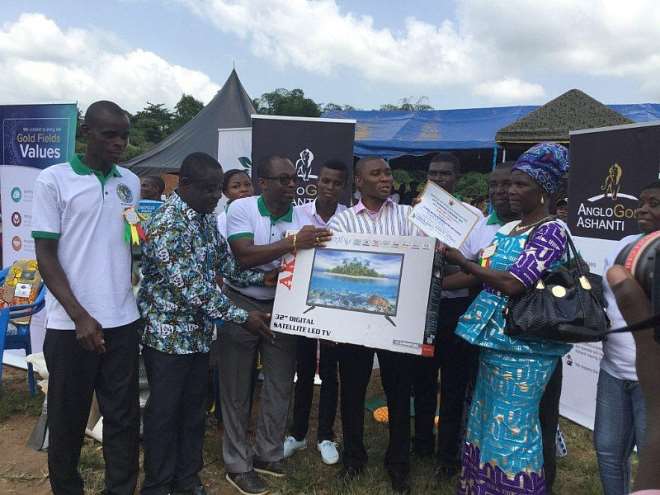