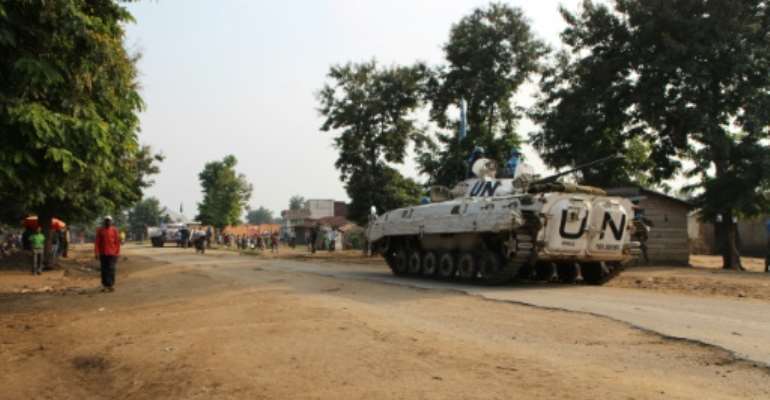 The UN peacekeeping mission in the Democratic Republic of Congo is the agency's largest and most expensive peacekeeping force. By STEPHANIE AGLIETTI (AFP/File)

The UN force in Democratic Republic of Congo on Monday paid tribute to troops who were killed last week, in the peacekeepers' biggest single loss in nearly a quarter of a century.

Tanzanian and Nepalese troops formed a guard for 14 coffins, draped with the Tanzanian flag, in a ceremony near Beni, in North Kivu province.

The UN on Sunday revised down the death toll from 15 to 14. While the Tanzanian press has said two other soldiers are missing.

The soldiers were killed on Thursday in the conflict-torn east of the country after clashes with suspected Ugandan Muslim rebels, the so-called Allied Democratic Forces.

David Gressly, the UN's deputy special representative for the DRC, said the peacekeepers would not step back from their work.

"The Blue Helmets will continue to protect the people of Beni," he pledged.

The attack is the bloodiest against MONUSCO, a force that was deployed in DRC in 1999, and the worst against a UN force since the death of 24 Pakistani peacekeepers in Somalia in June 1993.

The European Union on Monday said the "unacceptable attack... underscores the fragility of the security situation in eastern DRC, amplified by the current uncertainty over the country's political situation."

It called on the DRC authorities to carry out an inquiry "so that those responsible can be swiftly brought to justice," according to an EU statement issued in Kinshasa.