The Hypocrisy of Cultural Custodians 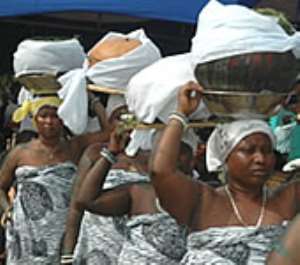 So sad but very funny when you detach yourself from the crazy stuff happening.

Let the supposed “educated people” keep on supporting and defending archaic traditions all in the name of “this is all we’ve got."

Let them hold on to the past, and they’ll forever be in it, while those others we always run to for foreign aid keep modifying their status quos and if need be, change them, just to keep up with an ever-growing phylogenic world. Be in the past, I bet it reminds you of keeping up with yesterday, even with the absurdities of yesterday now known to be absurd because of advanced knowledge.

Let them catch a glimpse of culture on only but occasions when the culture as far as it is known should be an everyday thing. If that’s culture you claim it to be, always visit the traditional fetish priest, observe every facet of your traditional culture. Pour libation if need be. And sacrifice your child when the oracle calls for that. Do away with the suit and tie for what your tradition truly stands for. You don’t just jump up on one day and brag about maintaining culture. Culture is an everyday thing, hypocrites!

Let them (those Muslims and Christians smiling to that kind of beauty in culture) keep being the hypocrites they’ve always been in the realistic studios of Ghallywood in real life; hypocrites who will later on call all that was done as that of Baal, idol worship ET Al. Much time ain’t needed, Sunday is two days away and guess what? Today is Flyday. Some will call traditional rites and religious practices “superstition” forgetting they also portray the same culture in their religions, only in a different way.

Let them defend it, let them defend culture at the expense of the sanctity of life, then scream “crucify him! crucify him!” later to people suspected to be robbers and murderers, people suspected to have eschewed a call to observe curfew all in the name of the inevitable - death 💀. Hypocrites! And that’ll explain why we will hardly progress. Come on, like really? You are there giving a thumbs up to beheading threats all in the name of tradition? And you call yourself a student? You see. That’s why I keep on saying there’s little evidence of hope for Nations like Ghana, Nations that’ll long to hold on to certain paleolithic traditions all in the name of being custodians to culture. Even those who have scratched the surface of education have been grappled by a system thriving on ignorance and hypocrisy. You’ll stay in it. You’ll stay in the local dirt, then beg on foreign hospitals to redeem you with aid when the ramifications of cholera starts glittering with the “it’s only a fool who recurrently says ‘had I known’“.

Okay bye. Now let me wait and see if some more hypocrites will verify themselves as hypocrites within the comment section below. Come on, verify yourselves, I’m waiting.