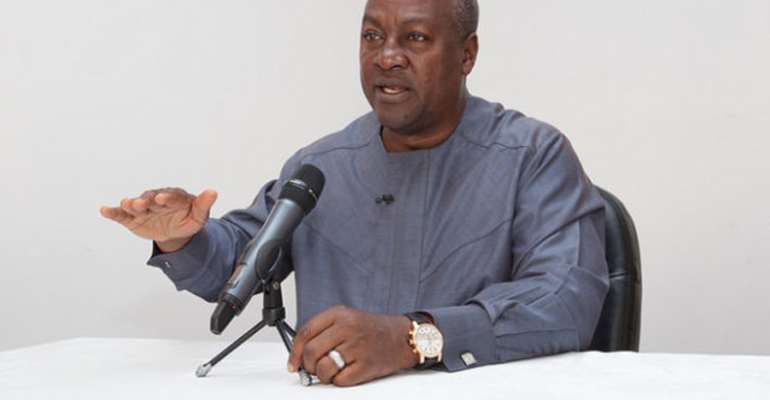 From all indications, former president John Dramani Mahama is bent on occupying the highest position of the land again in 2020 and so he is prepared to do whatever he can to realize this ambition.

Reports reaching DAILY GUIDE indicate that the ex-president is planning to take advantage of the ongoing funeral rites of the late Asantehemaa, Nana Afia Kobi Serwaa Ampem II, in Kumasi, to enhance his presidential ambition.

According to the reports, members of Mr. Mahama's camp have realized that the entire country's focus is on the Asantehemaa's funeral and so they believe they can take advantage of the solemn event to push their political agenda.

Asantehemaa's Funeral
The funeral rites of the Asante queen mother started a week ago and so far, no political party has displayed its colours at the forecourt of the Manhyia Palace, venue for the grand funeral.

President Nana Addo Dankwa Akufo-Addo and Vice President Alhaji Dr. Mahamudu Bawumia have attended the funeral on two occasions in less than one week, but on all the occasions, the New Patriotic Party's (NPP's) colours were missing.

Incumbent John Mahama, who was heavily defeated during the 2016 presidential polls by Nana Akufo-Addo, has been absent since the funeral started. His absence had even sparked a debate among some of the mourners.

The reason why the former president has not turned up for the funeral was explained by the National Democratic Congress (NDC) General Secretary, Johnson Asiedu Nketia, on Wednesday at the Manhyia Palace.

According to him, Mr. Mahama is currently on an important mission to South Africa, adding that the former Ghanaian leader would attend the Asantehemaa's thanksgiving service at the St. Cyprian's Anglican Church on Sunday.

Mahama's Strategy
This paper learnt that Mr. Mahama's camp is planning to accord him a rousing welcome to Kumasi either Saturday evening or early Sunday morning, for the thanksgiving service.

The NDC members, according to information, would be dressed in T-shirts that have been branded with huge images of Mahama with inscriptions that would make him seem the only suitable person to lead the party for the 2020 polls.

A source close to the NDC, who spoke to DAILY GUIDE, stated that some of the inscriptions in the T-shirts would read 'We want you back,' indicating that Ghanaians are yearning for the return of Mr. Mahama as president, and 'JM 2020 surest bet.'