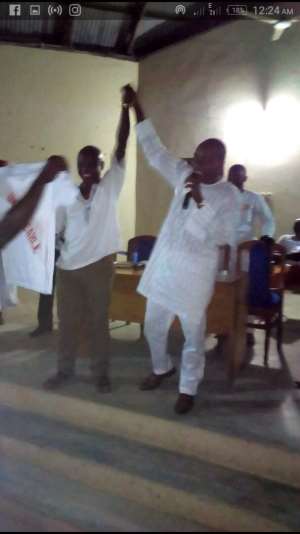 The New Patriotic Party (NPP) constituency Chairman of Ellembelle in the Western Region Mr. Francis Akainyah, is accusing the District Chief Executive (DCE) for the area and the party’s 2012 and 2016 parliamentary candidate Kwasi Bonzo of planning to oust him.

But in the view of the current Chairman, the endorsement is against the party’s constitution as the law frowns on a sitting DCEs or MPs openly endorsing persons to become a constituency chairmen.

The move is said to have sparked controversy in the area as the NPP chairman claims he feels threatened by the actions of the DCE who endorsed a purported opponent when he met NPP members at Aiyinasi on Sunday December 3, 2017 at Aiyinasi Community Centre despite his efforts to bridge the differences in the party.

Mr. Samuel Akainyah has threatened to petition the regional and national hierarchy of the party about the conduct of Hon Kwasi Bonzoh he observed is inimical to the party’s growth in the area.

When reached on telephone, the DCE confirmed endorsing Hon. John Asmah at the Aiyinasi Community Centre as reported but said this was in retaliation to the conduct of the Chairman and his cohorts.

“He is the same person who also brought in one lady and started introducing the person to members of the party as the next parliamentary candidate who can defeat Kofi Armah Buah. I did so to let him know that he is not the only person who knows how to play that game”, he said.

Mr Bonzoh revealed that the constituency Chairman with some unseen hands are also manipulating the system to ensure that his bleak political future which he threatened to resist with his might.