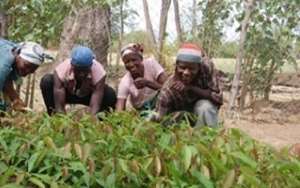 Residents of Kumasi are being urged to start backyard farming to boost food production.

The Kumasi Mayor observes about 90 percent of lands in the metropolis has been developed for either residential or commercial purpose, hence the call for backyard farming.

“The metropolis is challenged with lands. The few ones are being taken over by residential and commercial developments so I urge everyone to get into backyard farming. Apart from feeding your families with the produce, you also supply to these factories as a business,” he said.

The metropolis currently leads in spring onion production in the Ashanti Region.

The government has begun its industrialisation initiative using the agricultural sector as the main fulcrum.

The Mayor believes as farmers are encouraged to produce to utilise these policy initiatives by the government, the ordinary Ghanaians must also take advantage of it.

He believes Kumasi could have many factories, however, relying on supplies from only commercial farmers will not be enough to run these upcoming factories.

He spoke at the Metro Farmers Day durbar held in Kumasi.