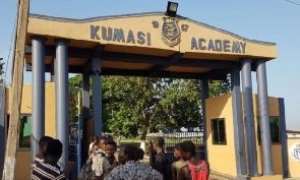 A group calling itself, Young Cadres Association (YCA), a vibrant youth wing in the opposition National Democratic Congress (NDC) has revealed that the increasing death of Kumasi Academy (KUMACA) could be occult hence needs spiritual interrogation.

So far the death of Kumasi Academy students stance at four since November 29, 2017 causing fear and pandemonium among students and parents thereby making some parents trooped to the school to withdraw their wards.

Addressing a news conference held in Kumasi on Thursday December 7, 2017 by the Health Minister, Mr. Agyemang Manu, confirmed that the outbreak is as a result of H1N1 Influenza virus.

But in a press statement issued on Friday December 8, 2017 by the leadership of Young Cadres Association has indicated that the death of the students is as a result of occultism and needs serious spiritual interrogation from the religious groups in Ghana.

The group also attributed the death and other untimely deaths happening in the country to the ruling New Patriotic Party for their unwarranted curses they reined on this country in 2016 prior to the general elections.

According to the group, "We all do recall a certain Abronye DC, an operative of the ruling New Patriotic Party (NPP) offering sacrifices in broad daylight to cast curses on the Chairperson of the nation's Electoral Commission, and by extension the nation itself".

The group also added, "Of course we have not also forgotten the Hon. Kennedy Agyapong, a close ally of President Akufo-Addo and a major financier of the NPP threatening to reveal the secrets behind the victory of the NPP in the 2016 elections... who knows - the Honourable Member of Parliament might know more than anyone of us!"

Below is the full statement
“When the righteous are in authority, the people rejoice; but when the wicked rule, the people mourn.” – Proverbs 29:2

This quote from the book of Proverbs in the Bible is a truism that sums up everything going on in Ghana. For the past twelve months, the nation has been subjected to countless incidents of mysterious deaths that have not only targeted adults and grown-ups but kids as well. This spate of mysterious deaths and uncountable accidents that have bedeviled this nation for the past one year have set numerous tongues wagging. From one gas explosion to another, to unexplained killings of officers from the nation’s security services, Ghanaians have simply lost count of the untimely deaths that have hit the nation in recent times. To add salt to injury, the country has had to yet again deal with a painful reality of having to bury seven of its young and budding talents from the Kumasi Academy - deaths that could best be described as spiritual in nature.

Against this backdrop, we the leadership of the Young Cadres Association (YCA) will want to add our voice to calls by some well-meaning Ghanaians for an in-depth introspection from the nation’s leaders and a spiritual interrogation from the country’s religious groups. We, as a youth group, cannot sit by unconcerned whilst the future human resources of the country are being decimated through what might well be occultic undertakings by some people in high places.

We all do recall a certain Abronye DC, an operative of the ruling New Patritotic Party (NPP) offering sacrifices in broad daylight to cast curses on the Chairperson of the nation’s Electoral Commission, and by extension the nation itself. Of course we have not also forgotten the Hon. Kennedy Agyepong, a close ally of President Akufo-Addo and a major financier of the NPP threatening to reveal the secrets behind the victory of the NPP in the 2016 elections. Who knows – the Honorable Member of Parliament might know much more than anyone of us!

The mysterious death of Kwabena Boadu, the former special assistant to Vice President Bawumia and the slaying of Honourable J.B. Danquah Adu have all gone unexplained and unanswered and yet the nation’s religious leadership have not gathered the necessary courage to dig deep and provide answers to the families of these departed souls and the nation at large.

For us, we will say “No longer shall it be that the fathers have eaten sour grapes and the children’s teeth are set on edge” to quote what Ezekiel told the Israelites. The young men and women of this country must under no circumstances be offered as sacrifices for people’s ambitions.