Natural Resources Should Be Well Utilized For National Progress 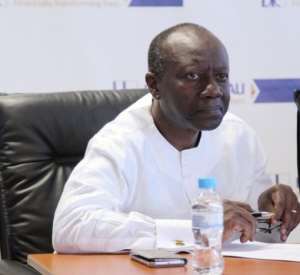 Mr. Ken Ofori-Atta, Minister of Finance has said that Ghana is blessed with abundant natural resources and that there was the need to utilize it for the comfort of the people through its right usage.

'If we put the national interest before our personal needs, the country's socio-economic circumstances would drastically improve.'

Mr Ofori-Attah said this in Accra, as the main speaker at the Third Aliu Mahama Lectures at the National Theatre, Accra.

He spoke on the topic: 'Transforming Ghana Beyond Aid: How We Get There'.

The Finance Minister said as a nation, 'we have failed to ensure the comfort of our people through the right use of our resources'.

The minister observed putting these resources to the right use, with the needed expertise and attitude, was crucial to the theme of his lecture, 'Transforming Ghana Beyond Aid.'

He said economic transformation was about people, adding that, the government's goal was to enable everyone to live in dignity and freedom.

Mr Ofori-Atta said the hard work being done by President Nana Addo Dankwa Akufo-Addo, stemmed from his deep desire to transform the country.

'As a people, we should be quick to recognize the goodwill of leaders and be supportive of their vision, in order to ensure the country's progress.

We need to be clear in vision that is understandable and acceptable by the people'.

He praised former Vice President Aliu Mahama, saying that, he added great value to the then Kufuor Presidency, adding that, the Vice President did not involve himself in any scandal during his tenure.

The Minister said such was the attitude, needed to ensure the progress of a nation and worthy of emulation.

He said when President Akufu Addo spoke about the country progressing beyond aid, what it meant was a 'revolutionary change in the people, where we added value to our work ethics, our education, our service delivery and our raw materials, amongst other vital areas.

Mr Ofori-Atta said it also meant a strong need to desist from and bring an end to the corruption of all forms.

He said hard work, sacrifice, discipline, a strong sense of duty and commitment, the ability to sacrifice for a good cause, were some of the qualities required for success, saying that, 'we will win if we all passionately protect the public purse.'

He also noted that it was important as a people, to live in peace, unity and love, in order to ensure the good of all.

Dr. Eric Osei Assibey, a Senior Lecturer at the University of Ghana, who chaired the occasion, said the theme of the lecture, 'Transforming Ghana Beyond Aid,' reflected the mood of the nation, adding that, it was important that 'we support our leadership to achieve that aim'.

He observed that if Ghana should benefit from its resources then, 'we need to own these resources for us to transform and finance our own development'.

Vice President Alhaji Aliu Mahama was born on March 3, 1946, at Yendi in the Northern Region.

As a young man, he studied at the Government Secondary School in Tamale from 1960 to 1967 for his Ordinary and Advanced Level Certificates, and proceeded to the Kwame Nkrumah University of Science and Technology from 1967 to 71, where he obtained a BSc in Building Technology.

In 1982, he successfully established his own Civil Engineering and General Construction firm, LIDRA Limited, and was the chairman of the Northern Regional Contractors Association in 1996, until the December 2000 elections.

Former Vice President Aliu Mahama was chosen, in the run-up to the 2000 general elections in Ghana, by then NPP Presidential Candidate, Former President John Agyekum Kufuor, and the council of elders of the party, as the running mate of former President Kufuor.

The Kufuor-Aliu ticket won the 2000 and 2004 elections respectively.

The Aliu Mahama Foundation, one of the many legacies of the former Vice President, was founded by him in 2002, to assist underprivileged youth and deprived communities.

The foundation seeks to assist people, especially the underprivileged, to live up to their full potential in a quest to promote dignified and fulfilled lives.