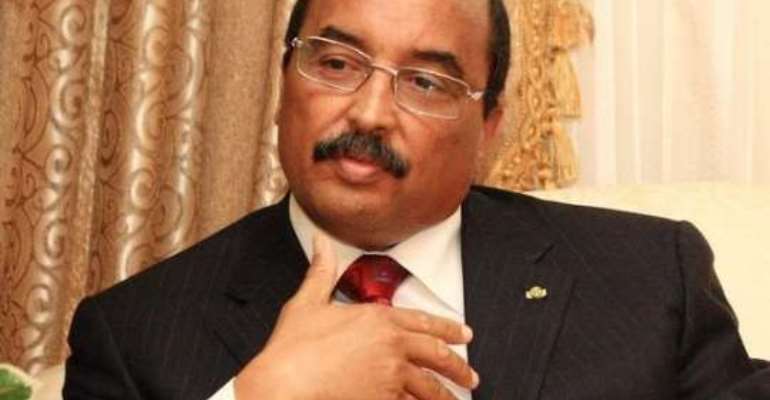 London, Dec. 7, GNA - The current international focus on Libya, where sub-Saharan Africans are being sold as slaves, has forced the President of Mauritania, Mohamed Ould Abdel Aziz, to admit that his country has its own long-standing problem with slavery.

Following up on a report by CNN on Africans being sold as slaves in Libya, and the ensuing international outcry, global anti-slavery organisations have also targeted the government of President Abdel Aziz, where a lack of official action during his nine-year tenure has meant that slavery is still in evidence despite laws against the practice.

As the campaign against slavery in the country gained momentum, President Abdel Aziz has angrily accused the head of IRA Mauritania, an anti-slavery non-governmental organisation, Biram Dah Abeid, of 'stepping up criticism against the regime on personal grounds' and of being 'selfish' in an outburst against his opponents.

The President, whose regime is facing criticism for its lack of action against slavery and for its poor governance, corruption and human rights record, added: 'We deal with slavery the same way we deal with theft and terrorism.

'We have legislations to combat these offences and crimes, but they continue to be committed. 'We improve our laws accordingly any time that we can'.

President Abdel Aziz claimed that slavery in Mauritania was 'overblown', despite Mauritania topping the Global Slavery Index, published by the Walk Free Foundation, for several years in a row.

Several anti-slavery activists have been imprisoned in a government-led crackdown on political opponents.

Reacting to this, anti-slavery activists told the GNA: 'It is clear that the criticism around the slavery issue has finally registered with President Abdel Aziz and he seems to admit that slavery in Mauritania is a problem for the first time.'

During the African Union-European Union summit of 83 heads of state in Abidjan last week, the Libya slavery issue topped the agenda.

President Emmanuel Macron of France took the lead in the race to find a solution to the problem.

He told the gathering that a number of countries, including Libya, France, Germany, Chad, Niger, as well as the UN, had "decided on an extreme emergency operation to evacuate from Libya those who want to be".

He added that the evacuations would start "in the coming days or weeks".

However, some West African countries, including Ghana and Nigeria, have begun evacuating their stranded nationals from Libya.

On Monday, the Nigerian government announced that it had repatriated 3,000 Nigerians so far while Ghana had airlifted about 160 of its nationals.

Anti-slavery groups believe that the Libyan slavery issue should not be dealt with in isolation, and that attention should also be focused on Mauritania, where slavery is still a problem even though it was officially abolished in 1981.

One such group is Anti-Slavery International, which noted in a recent report: 'Mauritania is one of the last countries in the world where people are still born into slavery and literally owned by other people, facing a lifetime of abuse and forced labour.

'Slavery has been criminalised since 2007 but the law has not been implemented - only two individuals have been successfully prosecuted for the crime in the 10 years since the law came into effect, showing how poorly the government's efforts to tackle the issue have been.

'A new law, passed in 2015, offered some new promise, but the government has been reluctant to admit that slavery even exists in the country, let alone to seriously tackle it.

'Instead, it has been very hostile to anti-slavery activists…'

However, anti-slavery activists think that in the case of slavery in Libya, where criminals are capitalising on the desperation of young Africans, robust international action will bring it to an end.