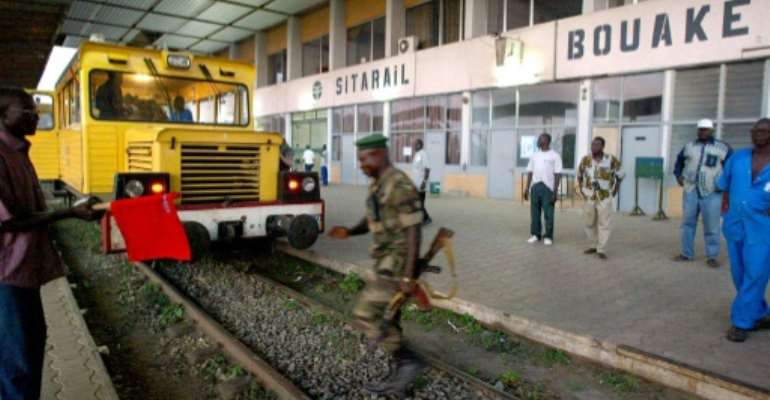 The unelectrified single-line track to Ivory Coast traces its origins back to the late 19th century, when France was looking for ways to link the colonised Sahel to its trading posts on the Atlantic. By ISSOUF SANOGO (AFP/File)

Ivory Coast and Burkina Faso on Monday began work to overhaul and expand a single-track rail line connecting Abidjan to the Burkinabe capital that is a vital link between the Sahel and Atlantic coast.

Renovating the 1,260-kilometre (782-mile) track -- which had first been announced in 2015 with no work being started -- is expected to take eight years.

All parties involved hope the project will improve traffic and trade between the two West African neighbours.

"Investment for the work, totalling 396 million euros ($470 million)... is the responsibility of the operator," Ivorian Transport Minister Amadou Kone said at the launch ceremony, referring to the giant French transportation company Bollore.

Burkinabe Transport Minister Souleymane Soulama said the project would make the current trains running at 40 kilometres (25 miles) per hour "a distant memory" and that speed and comfort would be the new standards.

Two new passenger trains and a locomotive will be added, 853 kms of track will be relaid, and 31 stations are to be refurbished.

This is the third time in two years that the countries have announced these renovations.

The unelectrified single-line track traces its origins back to the late 19th century, when France was looking for ways to link the colonised Sahel to its trading posts on the Atlantic.

After numerous interruptions, the line opened in 1954. After an economic crisis in the 1990s, management of the railways was handed over to Sitarail.

The line plays a key role for landlocked Burkina Faso in transporting cotton and manganese to the coast, and in importing oil, cement and fertiliser, but it suffers from poor tracks and ageing rolling stock, which limits train speed.

In September 2016, all traffic was stopped for two weeks after a bridge on the Ivorian side collapsed as a goods train was passed by, although no one was injured.

Bollore has a 67-percent stake in Sitarail, Burkina Faso and Ivory Coast each have 15 percent, and the remaining three percent is owned by the workforce.