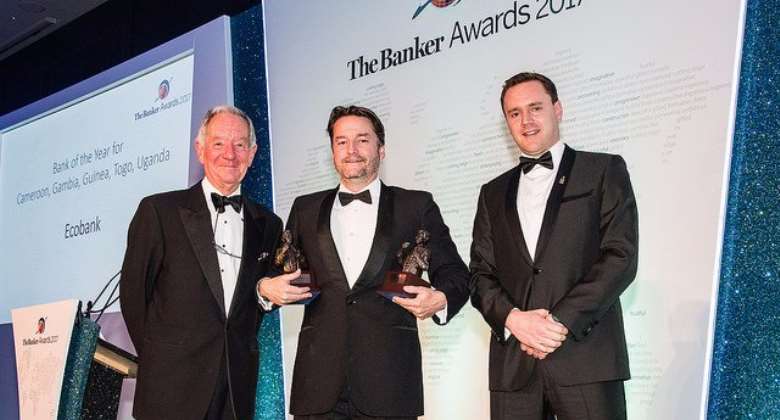 Ecobank, the leading pan-African banking group, has won “Bank of the Year” awards in five of its countries of operation.

Ecobank scored the five-trophy hall at The Banker awards, which were held on 29th November at the Hilton London Bankside, with Cameroon, Guinea Conakry, Gambia, Togo and Uganda, all emerging triumphant.

This is the second consecutive year that The Banker honoured Ecobank Guinea Conakry for its performance.

The Banker, part of the Financial Times, is one of the most recognised and widely respected trade finance titles. Judges said that the winning countries had made significant progress over the past 12 months; not only in terms of strong financials but by implementing new products and services which have transformed their customer service offering.

Ade Ayeyemi, Ecobank Group CEO said, “Ecobank is truly honoured to receive these awards. To remain relevant in Africa’s banking world of tomorrow, there is a pressing need for banks to disrupt themselves and transform their operating models.

"Ecobank is embracing these forces for change as we seek to build the most efficient digital banking platform in Africa,” he added.

He said over the past year, the bank has worked hard to strengthen its digital service delivery in order to fulfill its promise to connect Africa and reach out to the masses.

"Ecobank’s geographical spread across 33 African countries tells you just how committed we are to the pan-African model. The awards demonstrate that we are making progress delivering the bank’s integrated African vision, while continuing to innovate,” he added.