'Akufo-Addo Politically Wrong On Homosexuality But...' 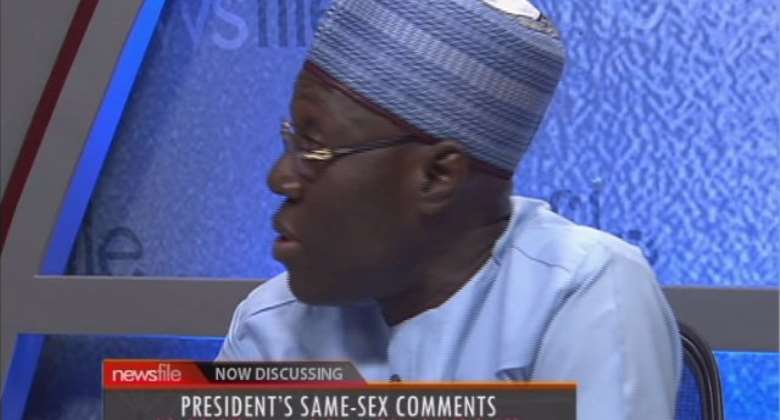 Inusah Fuseini said the President, however, on was point as he spoke "rightly" as a lawyer.

Speaking on Joy FM/MultiTV’s news analysis show Newsfile, Saturday, he said the President's comments amounted to an "invitation to treat."

“And that is again why I say that he communicated wrongly politically…people are looking at that statement as an invitation to treat,” he said

In a recent interview with Al Jazeera, the President stated that even though legalising homosexuality is not on his government's agenda for now.

But he said if there is a strong call for it by members of the society through agitation, the law banning homosexuals may be amended.

He also noted presently the practice of homosexuals is at variance with the country’s norms, culture and values.

His comments have triggered a new wave of controversy, one that was prevalent during the administrations of the late Professor John Evans Mills and ex-president John Mahama.

“His predecessors have set the tempo and that is why people are putting what he said against what they said…but the content of the communication differs significantly.

“I understand him to say he is tolerant and he might be willing to succumb to the forces that will bring about change. As a leader, if he is still in a leadership position and the coalition is strong enough for a change he is amenable,” he said.

The Tamale Central legislator said, “any politician who is looking at the political fall out or dynamics in the country will use political statistics in answering such a question and that is what he did.”

But Deputy Attorney General, Joseph Dindionck Kpemka, said the President never said anywhere that homosexuality is going to be legalized in Ghana

He said what the president said was taken out of context by some people for propaganda reasons.

Explaining the “bound to happen” comment by the President, he gave an example of life in the village where some lifestyles like haircuts, dressing and language use are unacceptable but has given way to modernity.

“Because of the way we have evolved over time and now living in a global village and a committee of nations and as a result, it is imperative that along the line certain things that have been considered as grievous, unpardonable and unacceptable in this society with changes in orientation may become acceptable eventually,” he said.

“He has not said anywhere that during his turn homosexuality is going to be legalized…the President said we should look at the difference between principles and reality,” he said.