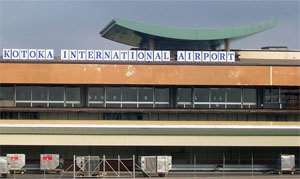 The International Organization for Migration (IOM) has launched the Public Health Emergency Response Plan for the Kotoka International Airport to guide the prevention and control of health related emergencies at that port of entry.

The plan seeks to position the Airport's health unit and other agencies to allow for the early detection and control of any unusual health event through adequate public health interventions without interfering with international travel of trade.

Addressing stakeholders in the Airport enclave, Madam Sylvia Lopez-Ekra, Chief of Mission, IOM Ghana, said the plan was in line with the Global Health Security Agenda which intended to promote an enabling coordinated approach to the implementation of public health intervention measures in the context of migration.

She said the outbreak of the Ebola virus disease and its rapid spread had shown that diseases could no longer be put seen in the local context alone.

According to her, due to the sheer volume of traffic at the Airport, the potential exist for the entry, rapid and widespread dissemination of communicable diseases.

'Therefore, the expeditious implementation of public health response measures at this airport will provide an opportunity to prevent the introduction or exportation of communicable diseases,' she said.

Mr John Attafuah, Managing Director, Ghana Airports Company Limited, called for the active involvement of ground workers in the training and preparation stages of such endeavours since they dealt directly with the public and clients.

He appealed to the public to be kind to port authorities during emergencies adding, 'Such exercises should not be seen as a burden. We live in the part of the world where within 12 hours, a virus or disease can reach our shores and in the same vein, such viruses and diseases can reach any part of the world from Ghana.'

Dr Franklin Aseidu-Bekoe, Director of Disease Surveillance, Ministry of Health, who represented the Minister of Health, Mr Kwaku Agyeman Manu, said the plan was a response to President Akufo-Addo's call for safety and security in Ghana's airspace and beyond.

He pledged that the government of Ghana would work with her international partners to prevent and contain cross border diseases.

Use dialogue, not brute force, childish behavior and 'takaas...
3 minutes ago

NDC to hold town-hall meeting in Kumasi to dissect Ghana’s a...
48 minutes ago