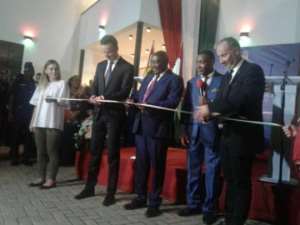 Vice President Dr Mahamudu Bawumia, says the re-opening of the Hungarian Embassy in Ghana would play a significant role in strengthening the bilateral and multi-lateral relations between the two countries in prosecuting their foreign policies to promote global peace and security.

Speaking at the official inauguration of the Embassy of Hungary in Accra on Thursday, Vice President Bawumia said, it would foster closer collaboration between the two nations and would be a win-win situation.

He said the Government of Ghana would focus the co-operation with Hungary on economic and technical levels as well as trade and investments for their mutual benefits.

He said: 'The Government and people of Ghana are highly appreciative of the numerous Hungarian Government Scholarships offered to Ghanaian students since 1961 to undertake courses in Hungary under the Technical and Scientific Co-operation Programme'.

He said under the programme Ghanaian students studied engineering, medicine and agriculture while a number of Hungarian specialists, engineers and medical doctors had also completed various missions in Ghana.

Vice President Bawumia acknowledged the long standing bond of friendship that existed between Ghana and Hungary over five decades and pledged government's commitment to enhance the bilateral relations to greater heights.

'Without a doubt the re-opening of the embassy has contributed enormously and will continue to play a significant role in the strengthening of relations as we both prosecute the foreign policies of our countries in a manner to promote peace and security in the world,' he noted.

He said the Nana Addo Dankwa Akufo-Addo led government had started initiatives, which showed that the country's future was very bright and noted that, Africa was moving forward in term of economic and political advancements and Ghana would be in the lead by establishing the most business-friendly climate on the Continent.

He said Hungary runs its relations with Ghana as the third most important in Africa and expressed hope that the re-opening of the diplomatic mission would strengthen the bilateral relations between the two countries.

The Vice President commended the Hungarian Minister of the Foreign Affairs and Trade, Dr Peter Szijjarto, for spearheading the project and noted that, Dr Szijjarto visited Ghana in October 2015, which culminated in the signing of a number of agreements and commencement of work towards the re-opening of the Embassy in Ghana.

He said in the spirit of true partnership both countries had signed numerous agreements covering various critical sectors of the Ghanaian economy such as agriculture, education and culture, economic and technical co-operation amongst others.

He said the relations between the countries had been very fruitful characterised by regular exchanges of high level visits and active engagement of both bilateral and multilateral levels.

The Hungarian Embassy re-opened in April 2016 after the Hungarian Government closed her mission in Ghana in 1989.

Vice President Bawumia said Hungary was one of the Socialists countries to establish diplomatic mission in Ghana in 1961 and noted that since then the relations between the two nations had been cordial.

Currently about 50 Ghanaian nationals are studying in Hungary under Hungarian Government Scholarships and the number would increase to 100 next year.

Dr Peter Szijjarto, the Hungarian Minister of Foreign Affairs and Trade, said the re-opening of the Hungarian Embassy in Ghana was on the basis of emotional and rational reasons.

He said the closure of the Hungarian mission in Accra about 30 years ago was a mistake and a bad decision and pledged his government's resolve to make amends by enhancing the bilateral co-operation between the two nations.

Dr Szijjarto said the re-opening of Hungarian mission in Ghana was meant to show respect to the government and people of Ghana and acknowledged the long standing friendship between the two countries.

He said many Ghanaian students had undertaken various courses in Hungary and that should be an effective link in advancing their co-operation.

Dr Szijjarto announced the increase of the Hungarian Government Scholarships to Ghana from 50 to 100 from September next year, and noted that, it was not aid that the African Continent needed, but employable skills and technology.

He expressed the belief that through the Hungarian Government Scholarship programme, the skills and experiences of Ghanaians would be enhanced to contribute meaningfully towards the development of the nation.

'We see Africa as future China and you are about to reach a booming economy and demography as well therefore the Hungarian Government has launched a policy called 'Southern Opening' to enhancing the co-operation between our country and Africa,' he said.

The Hungarian Foreign Affairs and Trade Minister said the Government of Ghana's launch of 'One District, One Factory' programme coincided with that of Hungarian Government's objectives, which was based on industrialisation and could contribute towards the success of the initiative.

This, he said, motivated the Hungarian Government to sign economic co-operation agreements with Ghana and opened the 140 million Euros Credit line by Hungarian EXIMBANK.

He said the Government of Hungary would undertake a number of projects in Ghana including infrastructure development, renewable energy, defence and security, industry, research and agriculture, as well as sports and culture and would build her relation based on mutual respect that would inure to the benefit of the peoples of the two countries.

Mr. Andreas Szabo, the Hungarian Ambassador to Ghana, said the Hungarian Government would like to diversify her economic relations and build closer economic ties with the emerging economies, especially in Africa.

He said it would strengthen her presence on the Sub-Saharan Africa through opening of more diplomatic missions and economic partnerships.

Mr. Szabo indicated that Hungarian Government would increase her investments in Ghana through construction industry, health, agriculture, ICT, food processing and work together in the area of security and defence and sports development.

The ceremony attracted high profile personalities including the diplomatic community, Ministers of State, traditional rulers, the clergy and members of the public.