Hypocrites, The Lebanese Have Long Enslaved Ghanaians In Ghana! 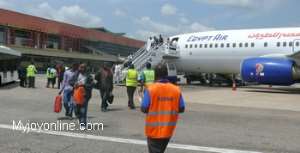 Our patently primitive and benighted fixation and pathological obsession with homosexuality – by the way, Alexander-The-Great and Michelangelo were homosexuals, as also were Plato and Aristotle, among a legion of others – may have blinded Ghanaian, and other Black-African, leaders to the glaring and all-too-well-known fact that our North-African Arab neighbors and longtime occupants of our ancestral lands never abolished their institutionalized age-old culture of indigenous African enslavement (Mauritania is a striking case in point), even while the leaders of these Maghreb countries deftly and strategically used the African Union (AU) as a political façade of their pretense to Africanity. To be certain, these North-African Arabs would rather have indigenous Africans thoroughly exterminated, so that they could have “lebensraum,” in Nazi parlance, or wantonly exploited like human automatons to further their collective self-interests (See “3 Ghanaians Sold as Slaves in Libya” DailyGuideAfrica.com / Ghanaweb.com 11/30/17).

But what viscerally disgusted me more than anything else, was the news report in which the National Democratic Congress’ Member of Parliament for Tongu-North, in the Volta Region of Ghana, Mr. Samuel Okudzeto-Ablakwa, vehemently carped our North-African Arab neighbors for allegedly treating “their fellow African brothers” with utter disdain and ineffable wickedness “just because of our darker skin color.” Would I be right here, therefore, in supposing that the 30-something-year-old former Deputy Education Minister and ranking member of the Parliamentary Foreign Affairs Committee, was too young to have studiously followed the atrocious and apocalyptic events in The Sudan that precipitated the splitting of that historic country, respectively, into an Arab-dominated North (presently called Sudan Proper/The Sudan, talk of irony of ironies), and an indigenous but scarcely cohesive and progressive South Sudan.

If the foregoing observation has validity, then the Tongu-North National Democratic Congress’ MP had better seek immediate audience with Mr. J. H. Mensah, the former Senior Minister and brother-in-law of former President John Agyekum-Kufuor, for a crash course on this subject. Interestingly, though, the widely alleged wanton exploitation and enslavement of some Ghanaians and some of their fellow indigenous African kinsfolk is not very different from the morally inexcusable elitist Social Darwinian policy agenda doggedly pursued by the Rawlings-founded National Democratic Congress, especially under the grossly incompetent, thoroughgoing corrupt and crassly irresponsible leadership of Chairman Jerry John Rawlings, Prof. John Evans Atta-Mills, late, and Mr. John Dramani Mahama.

And on the latter count, it goes without saying that it is the radically stiff resistance by these faux-social democratic leaders to such salutary policies as the Akufo-Addo-initiated fee-free Senior High School System, as well as the National Health Insurance Scheme (NHIS), implemented by former President Agyekum-Kufuor, that has served as a centrifugal or outward-migration force, or motivation, of those Ghanaians who find themselves obscenely caught up in the apocalyptic maelstrom of chattel enslavement in the Maghreb. Indeed, under the extortionate and protracted tenure of the Rawlings Posse, the labor and industrial base of Ghana, easily one of the most prosperous and progressive “Sub-Saharan” African economies, was totally destroyed. The rate of unemployment shot upwards of the 60-percentage mark. One does not need even a Senior High School diploma or certificate to logically arrive at the inescapable conclusion that any people bereft of a viable economic existence or sustenance are prime candidates for the wanton exploitation – including chattel enslavement – by those whose better managed national economies they may be forced to transgress.

The widely discussed enslavement of indigenous Africans by their North-African Arab neighbors in the Post-Gaddhafy era, is decidedly reflective of the gross and abject incompetence of the leaderships of these indigenous African nationals themselves. Nobody needs to look further than the Sub-Saharan homelands of these indigenous Africans themselves. In Ghana, for instance, ethnic Lebanese Arab business owners and employers are notorious for the wanton and extra-legal labor practice of the physical abuse of their native Ghanaian employees and household help. It has been only during the last 10 or 11 months, under the Akufo-Addo-led government of the New Patriotic Party (NPP), that the critical question of the fundamental human and civil rights of the Ghanaian working-class citizen, vis-à-vis the resident Arab community of largely wanton and reckless predators, been taken seriously. I am here, of course, referring to the pepper-bath incident at the infamous Marwako Restaurant. The truth of the matter is that indigenous Africans are our own worst enemy.

It cannot be gainsaid that the leadership of an economy that routinely and perennially has public and civil servants sweating it out for months and years, without the payment of a single salary or wage, let alone worker bonuses, has absolutely no moral authority to lambaste the leadership of another more robust economy that “mercifully” decides to employ these veritable indigenous African slaves as fairly marketable commodities, even for the miserly pittance of between $ 300 and $ 500 to a willing buyer. At least from what we have learned so far, these modern-day chattel slaves are assured of one decent “falafel” meal a day.