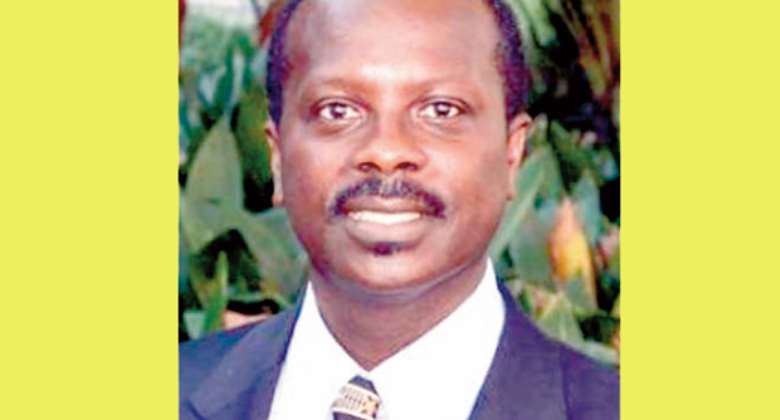 The lawyer who has been challenging the General Legal Council (GLC) over the conducting of entrance examination before lawyers are admitted into the Ghana School of Law, has criticized the attempt by the council to get parliament to pass a law entitled Legal Profession Regulation.

Prof. Stphen Kwaku Asare popularly called Kwaku Azar, who is mostly based in the United States, described the Legal Profession (Professional and Post-Call Law Course) Regulations, 2017) as “nothing but a sham.”

Last-Ditch Effort
He said it was a 'last-ditch' effort by 'an out-of-touch' General Legal Council (GLC) to legalize three important things he called “a quota system, a fatally flawed entrance examination and a subjective interview requirement.”

In a letter urging parliament not to accept the proposal, the lawyer said legal education stands to benefit if the GLC is thrown out by the lawmakers.

“The proposed Regulation seeks to dismantle the objective, incorruptible, progressive and automatic admission requirements and replace them with subjective, corruptible, regressive and opaque requirements that entrench the GLC's power and augur ill for legal education in the country,” he noted.

Prof. Kwaku Asare said, “Given the acrimony, confusion and ultimately the Supreme Court's repudiation of these abhorrent admission policies, one would have expected the GLC to activate a broad consultation process to seek a way forward that is progressive and reflective of the underlying increase in the population of people interested in legal education.”


Unrepentant GLC
He continued, “Alas, the unrepentant GLC has doubled down on its sins and secretly drafted a fatally flawed and self-aggrandizing Regulation in the hope that it could be laid quietly in Parliament to mature into law in 21 days. Clearly, like the bourbons of yore, the GLC learnt nothing and forgot nothing!”

Prof. Asare charged, “The time is ripe for Parliament and all relevant stakeholders to concede that the School of Law, as conceived in 1958, where all LLB degree holders converge to a central location (or locations) to pursue professional courses, is an obsolete concept,” insisting that “It is a 1958 solution to offering legal education to 10 law students in a newly emerged independent country, with 1 Law Faculty, that is entirely anachronistic in a matured country with 10 Law Faculties.

Comparative Advantage
According to Prof. Kwaku Asare, the Ghana School of Law “has no comparative advantage” in teaching such courses, “nor are these courses so unique that they cannot be taught at the 10 Law Faculties.”

“The obvious solution therefore is to require law students to take all courses at their Law Faculties after which they can apply to take the Bar examination, administered by a reconstituted GLC, made up of fair-minded people,” he proposed and added,p; “It is time to collapse the faux and unnecessary distinction between the academic and professional law courses. It is also time to restructure the moribund GLC.”

Unruly Council
According to the lecturer, “No self-respecting Parliament will allow the unruly GLC to legalize and normalize its atrocious admission policies that have occasioned uncommon inconvenience, needless hardship and miscarried justice for thousands of qualified citizens. The Sierra Leone Parliament, faced with a similar set of circumstances, sided with justice and their constituents to reject a similarly fraudulent regulation. We expect no less from our 275 MPs.”

He posited,“The Regulation also seeks to impose additional and unnecessary burdens on Ghanaian lawyers trained in other common law jurisdictions with the primary, if not the sole, purpose of preventing them from practising in Ghana.”

According to him, “There is no reason why these lawyers must be required to attend classes for one year when they can be allowed to demonstrate their proficiency by writing an examination. In addition, these lawyers cannot be converted into cash cows by charging them exorbitant and extortionary entry fees.”

Return To Sender
Prof. Kwaku Asare maintained that the Legal Profession (Professional and Post-Call Law Course) Regulations, 2017 “is dead at birth and must be returned to sender,” adding, “Parliament must not go to sleep and allow the proposed Regulation to ripen into law.

“It is time for Parliament to amend the Legal Profession Act 32 (1960) to dissolve the GLC as currently constituted and to create a 21st century Council for Legal Education that is responsible for accrediting Law Faculties, administering Bar examinations, and setting and enforcing ethical and quality control standards for qualification and practice as a lawyer.”

‘I didn’t snatch Speaker’s seat; I was only preserving it fo...
6 minutes ago