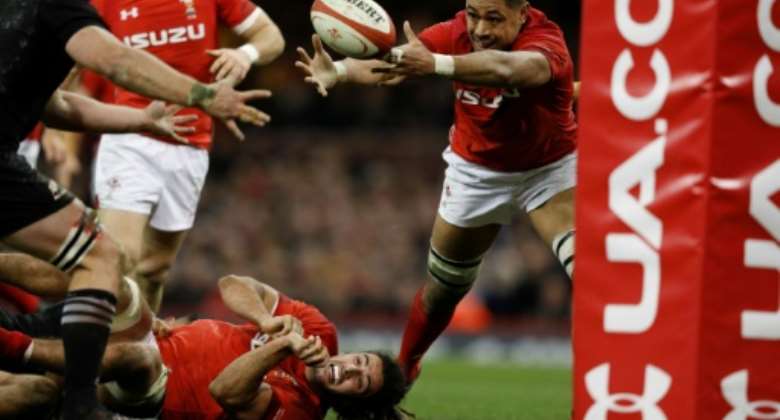 Wales' No. 8 Taulupe Faletau stretches for a loose ball during their rugby union Test match against New Zealand, at the Principality stadium in Cardiff, on November 25, 2017. By Adrian DENNIS (AFP/File)

Injury-hit Wales are targeting an unprecedented third consecutive home victory over South Africa on Saturday, with both teams by their own admission building depth ahead of the 2019 World Cup.

With 11 of his initial 36-man squad out injured, Warren Gatland has had to juggle his squad. Skipper Sam Warburton has been joined on the sidelines by fellow Lions George North, Jonathan Davies and Liam Williams among others.

Gatland has responded with five changes, including handing fellow Kiwi Hadleigh Parkes a first cap in a game being played on the very day he qualifies for his adopted country through three years of residency and a rare start at scrum-half for Aled Davies.

"Saturday is an opportunity to continue to build on what we have done so far and round off the autumn campaign with a big performance," said Gatland.

Wales opened their campaign with a 29-21 defeat by Australia, followed by a scrappy 13-6 victory over Georgia and last week's 33-18 loss to world champions New Zealand.

"We have spoken about exposing the squad to Test match rugby and this weekend is a great opportunity for Hadleigh to earn his first cap and for Aled to make his first start of the campaign," Gatland said.

South Africa have lost their last two games against Wales in Cardiff, but Gatland said: "We're expecting a hard encounter on Saturday and hopefully those experiences, performances and opportunities we created in terms of territory and possession against New Zealand, we need to convert that into points against South Africa.

"The result's important, there's no doubt about that. The players, all of us, know how important it is to get a result."

South Africa's lock and captain Eben Etzebeth (C) leaps in the line-out during their friendly rugby union Test match against France, at The Stade de France Stadium in Saint-Denis, on November 18, 2017

Springbok lock Lood de Jager said the South Africans were aiming to wrap up a season that has shown much improvement on last year, when the Springboks managed just four wins from 12 Tests.

"We were utterly disappointed with last year, all the results we had," De Jager said.

"This year, from the start we said we needed to be better, on and off the field, and there's a better vibe than last year.

"This year has been about restoring pride. We needed to after a year like last year, it was not up to our standards, or standards of the history of Springbok rugby."

De Jager added: "If we get a good result on Saturday, we can be reasonably pleased with the year.

"It's our last game for six months and we want to end the year off well."

Springbok coach Allister Coetzee has rung the changes from the side that dismantled Italy 35-6 last week, making five changes to the starting line-up.

"Wales are still a good side," Coetzee said. "They've got great attacking ability... they're very competitive at set piece -- you can never write off the Welsh team."

Turning to his own side, Coetzee added: "I'm really satisfied by the progress shown this year. I'm comfortable this year that the players have really grown, there's been a lot of cohesion.

To finish the season on a winning streak of three would show "massive progress, massive improvement", the coach said.

Tight security at courts over possible terrorist attack
23 minutes ago

‘We don’t have anything here for Sir John’ – Lands Commissio...
23 minutes ago