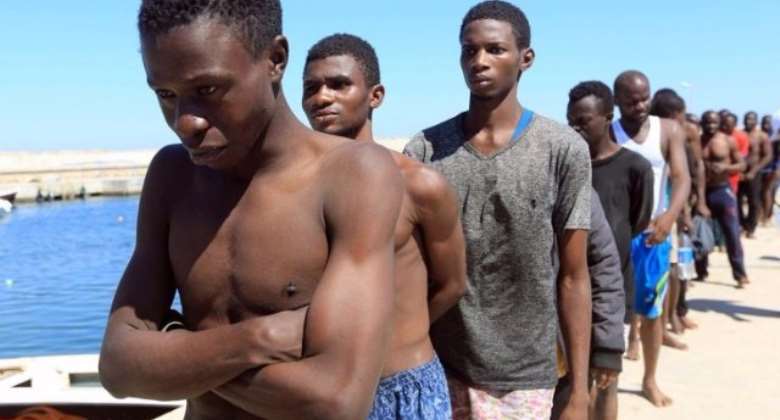 The over one hundred Ghanaian migrants who were rescued from Libya have appealed to the government to assist them with viable jobs that can sustain them.

Over 160 of them detained in Libya were expected back home after government facilitated their release from the Libyan authorities.

Some of the returnees who spoke to Joy News’ Komla Adom at the Kotoka International Airport where some 127 of them touched down Wednesday night, recounted some of their worst nightmares.

One of them said the trip is deadly as Libyan children even rob immigrants at gunpoint and some of the travelers are killed on the desert.

For many of them, it is a story of a failed journey to Europe in which they can only count their losses.

Ansah, 28, was on his way to Italy through the Mediterranean Sea when he was arrested and subjected to months of torture.

“When they caught me on the Sea, they took me to an uncompleted building where I stayed for six months. They only give us one meal a day at 2 p.m and the water they gave us was salty water,” he told the reporter.

The terribly disgruntled gentleman said there were 17 of them in detention but seven people died.

Those who did not die were sold.
Another victim said some of us are sold for $3000 or less where your owner will brutalize you and not pay you for the work you do for him/her.

Some are even shot in the leg.

Reintegration into society
In a move to help the returnees to settle and reintegrate into society, the Country Director of International Organisation for Migration (IOM), said they will help them to reach their homes in a dignified manner.

Silvia Lopez said, “we will do what we can to help them integrate into society.”

One of the returnees who said he used to make and sell tomato boxes patronized by tomato sellers who travel to Burkina Faso to buy the vegetables, said he will need some capital to set up on a large scale.

“The ¢440 given to us is inadequate and these clothes I am wearing now, I am ashamed to take it home,” the returnee told the Joy News reporter.

The issue of migration is expected to feature prominently.

In an earlier meeting with the Dutch President, President Akufo-Addo said his main task is to create the enabling environment for jobs to be created.

He reiterated that ensuring dignified lives for those who are unemployed is the only way to dissuade the youth from embarking on such dangerous trips on the desert or sea in search of a better life.

Migration Forum
In the wake happenings in Libya, the migration dilemma has become a global crisis with many calling for an end to this phenomenon.

But would you still risk it to cross the Mediterranean for a better life? What will inform such a decision?

Joy News together with DW will on Thursday evening seek some answers from the government and key stakeholders on how to deal with this migration menace.

The forum dubbed Migration dilemma will be live on Radio, TV and Online from the ISSER conference room Legon at 5 pm.

I'll hand over power to the next elected president on 7th Ja...
17 minutes ago

[VIDEO] Ghana is hot; our girlfriends are moving to Togo – J...
26 minutes ago