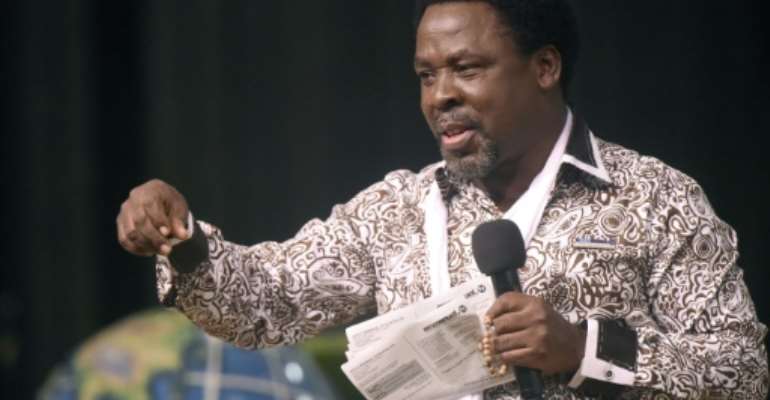 TB Joshua is one of several so-called faith healers in Nigeria claiming an ability to cure people of AIDS. By PIUS UTOMI EKPEI (AFP/File)

Blessing wanted to believe the advert on Facebook that promised "a cure for AIDS".

Infected with the human immunodeficiency virus (HIV), she felt the ad was her only hope -- so against her better judgement, she clicked on the link.

The 30-year-old Nigerian had created a fake profile on the social networking site in the hope of contacting a traditional healer who would be familiar with modern technology.

For 100,000 naira -- about $280 (230 euros) and more than five times the monthly minimum wage -- she was promised a plant-based potion that would completely eradicate the disease.

Sceptical, Blessing asked for more time and a face-to-face meeting. Instead, her would-be benefactor asked for her bank account details.

That was several months ago.

"He talked only about money, so I gave up," said Blessing, whose name has been changed at her request. "But I was ready to try."

"There are so many people giving positive testimonies about the drug," she told AFP in a soft voice.

Since then, with the distribution in Nigeria of free antiretroviral treatments that repress the virus -- but do not eliminate it -- Blessing has been able to finish her studies in sociology in Abuja.

She said she now feels more comfortable with her HIV-positive status, but while she has a few business projects, the hardest thing has been finding a boyfriend.

"I was desperate. Any relationship I wanted to be in was difficult. I know I have to live with the virus," she said.

Despair and stigma for people living with HIV make them easy targets for a range of supposed miracle workers, including internet scams, in deeply religious Nigeria. 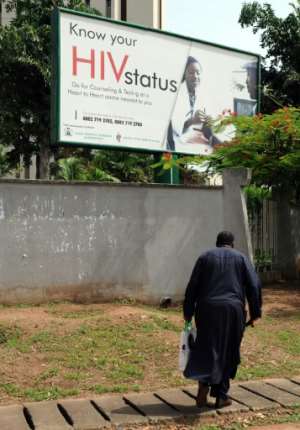 An estimated 3.2 million Nigerians are living with HIV, and the stigma of the condition makes many people easy targets for supposed miracle workers

Not a month goes by without a Christian pastor announcing that a follower has been "saved".

In Lagos, the commercial capital of more than 20 million people, vast and imposing evangelical churches have become a magnet for the sick from across Africa.

Among the most well-known faith healers is TB Joshua, who runs the Synagogue Church of All Nations, and whose popularity has earned him a multimillion-dollar fortune.

He prides himself in his claims of having cured people of AIDS and even in bringing the dead back to life.

His website is full of testimonies about his apparent powers of prophecy.

One on his TB Joshua Ministries page on Facebook is titled: "AIDS kicked out with prayer."

"Mr Ubon Augustine is a living testimony that no disease can escape the healing power of Jesus Christ," it reads. "He was healed of HIV/Aids through a prayer... Thank You Jesus!"

Others also claim to have found the scientific cure for HIV, publishing research in obscure journals.

One such assertion, from a professor at an agricultural university in the southeastern state of Abia, garnered significant coverage in the Nigerian news media earlier this year.

Maduike Ezeibe claimed that after 25 years of research, he had successfully tested a drug he had developed on patients.

"Nigeria is thus (the) first country to get 10 people (to) recover from HIV/AIDS," he was quoted as saying by Nigeria's Guardian newspaper in March.

Nigeria's health agencies condemn such claims on the grounds of the "absence of sound scientific evidence" as well as the dramatic effects on patients if they stop taking conventional treatment.

HIV levels can fall to below detectable levels with the help of a daily pill, but rebound when the treatment is stopped.

The viruses swiftly reproduces to attack immune cells, exposing the body to opportunistic disease and worsening the risk of infecting others.

"If someone thinks he is cured of the virus when on the contrary he still has the virus, the risk of transmission will be higher," said Daniel Ndukwe of the National Agency for the Control of AIDS (NACA).

"We have had people claim they were cured of HIV by miracle healing, and we have also heard of those who later had a deterioration of their health afterward," he said.

No formal study has been undertaken in Nigeria to explore the phenomenon but there is no doubt that many have seen a market for apparent miracle cures.

According to UNAIDS, prevalence of HIV among adults in Nigeria was 2.9 percent in 2016, which is relatively low compared to countries such as South Africa (18.9 percent).

But the actual number of people living with the condition -- 3.2 million -- is among the highest in the continent.

Emmanuel Ugochukwu Michael, the founder of a match-making agency for people with HIV, says he is regularly approached by people asking for his 7,000-name database.

"I receive a lot of calls from traditional doctors and mainly from pastors," he said.

"They invite me for a dinner and promise to pay me money if I provide them phone numbers of my clients," he added.

"It's a lot of temptation. It gives me a lot of sleepless nights, I can tell you.

"There's huge money to be made and everybody wants to take advantage of it."