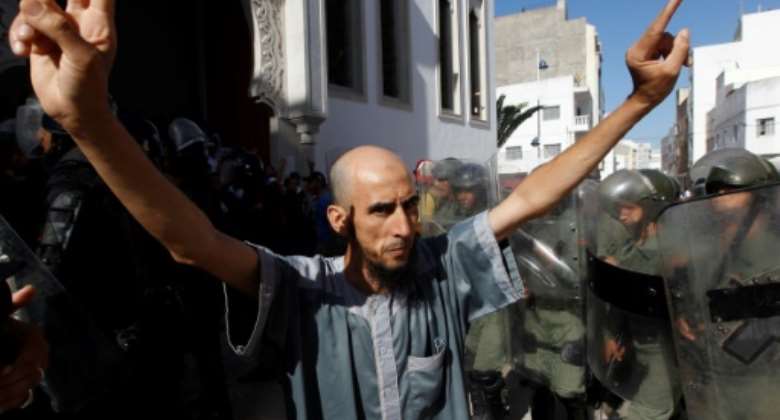 A demonstrator gestures in front of Moroccan security forces during a march in the northern Moroccan city of Al-Hoceima on July 20, 2017 in defiance of a government ban. By STRINGER (AFP/File)

Human rights group Amnesty International urged Moroccan authorities on Tuesday to release more than 400 people detained over protests in the neglected north of the kingdom over the past year.

Its call came as the Casablanca Court of Appeal held a new hearing in the trial of protest leader Nasser Zefzafi and 53 others, some of them charged with state security offences that can carry prison terms of up to 20 years.

Amnesty said that children and several journalists were among at least 410 people arrested since May over the largely peaceful protests that have gripped the Rif region since October last year.

"The authorities must free Nasser Zefzafi and others detained for protesting peacefully or covering demonstrations online."

Amnesty said Zefzafi had been held in solitary confinement for 176 days, while journalist Hamid El Mahdaoui had spent several weeks in solitary.

It said that most of the defendants in the Casablanca trial faced accusations of "inciting", "participating" or being "complicit" in unrest without any evidence being provided of their individual criminal responsibility for any act of violence.

It said most of the charges were inconsistent with Morocco's human rights obligations since they criminalised the peaceful exercise of the rights to freedom of assembly, association and expression.

The Rif has historically had a tense relationship with central authorities in Rabat, and it was at the heart of Morocco's Arab Spring-inspired protests in February 2011.

The latest protests erupted after a fishmonger in the port of Al-Hoceima was crushed to death in a rubbish truck as he tried to retrieve swordfish dumped by authorities because they were caught out of season.

Covid-19: Headache, body pains show the vaccine is working i...
39 minutes ago