Clashes as Kenyatta to be sworn in for disputed second term 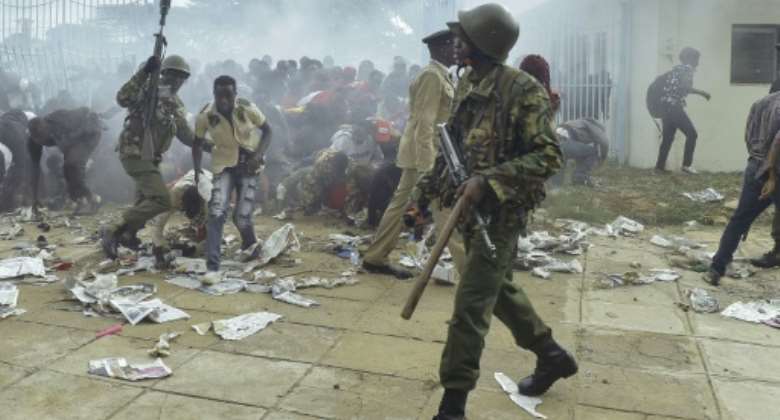 Chaos erupted at Kenya's Kasarani stadium in Nairobi as supporters of President Uhuru Kenyatta tried to get into the venue to attend his inauguration ceremony. By SIMON MAINA (AFP)

Kenyan police fired tear gas and clashed with both ruling party and opposition supporters Tuesday ahead of the swearing in as president of Uhuru Kenyatta after two disputed polls that have left the nation deeply divided.

As foreign and local dignitaries poured into the 60,000-seat Kasarani stadium in Nairobi for the ceremony, the opposition attempted to gather for a "memorial rally" honouring the more than 50 people killed, mostly by police, in four months of political upheaval.

Chaos also erupted at the Kasarani stadium as a crowd of Kenyatta supporters attempted to force their way into the venue, prompting police to fire tear gas.

"I just want to see President Uhuru Kenyatta because I voted for him, why are we being beaten like NASA (the opposition coalition)," said Janet Wambua, who was among the angry crowd.

Joseph Irungu of the interior ministry planning committee had said there was space for 40,000 people who did not get in to watch the event on big screens outside the stadium. However no such screens were provided, further angering the crowd.

Around 13 mostly African heads of state are expected to attend the ceremony where Kenyatta, 56, will be sworn in for his second and final five-year term.

These include the presidents of South Sudan, Uganda, Rwanda, Zambia and Somalia -- among others.

However, the swearing-in may not draw a line under the country's political crisis with his defeated rival Raila Odinga vowing to fight on.

The NASA coalition has described Tuesday's inauguration as a "despotic coronation".

The electoral strife goes back to an August 8 poll that was annulled in September by the Supreme Court, citing "irregularities and illegalities".

The court ordered a rerun in October that was boycotted by the opposition, handing Kenyatta a landslide of 98 percent of votes cast by just 39 percent of the electorate.

The disputed election season has split the country along ethnic and regional lines, although political violence has not reached the scale of that which followed a 2007 poll when 1,100 were killed.

Odinga, denied the presidency for a fourth time this year, believes that he was cheated and the 72-year-old has refused to recognise the result.

He has promised to found a "third republic" -- following independence from Britain in 1963 and a new constitution adopted in 2010 -- as well as to continue a programme of protests and economic boycotts aimed at undermining Kenyatta's "dictatorship".

The current political crisis draws on a deep well of social, ethnic and geographic grievances in the country of around 48 million people.

In areas loyal to Odinga, an ethnic Luo, there is a sense of having been ground down and discriminated against since independence, not least by Kenyatta's Kikuyu group, which has given Kenya three of its four presidents.

The months of disruption and unrest, plus the holding of two separate elections, have badly affected the economy, hitting the poorest hardest while leaving the wealthy political elites relatively unharmed.