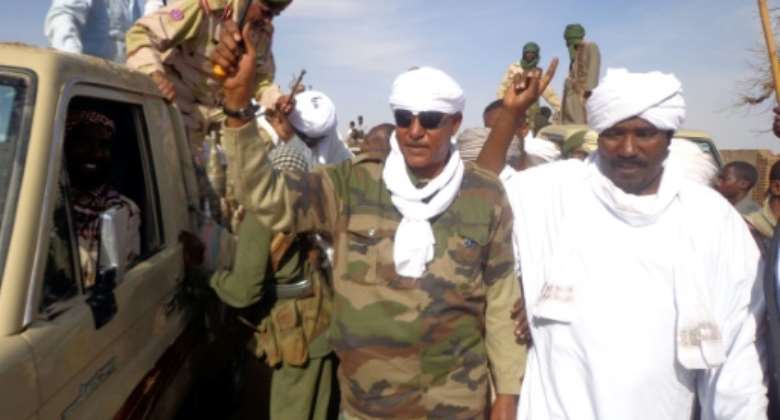 Musa Hilal (C), the leader of the Arab Mahamid tribe in Sudan's Darfur region, salutes followers in Nyala, the capital of South Darfur state, on December 7, 2013. By - (AFP/File)

Sudan's counter-insurgency forces have arrested a powerful militia chief from Darfur accused by the United Nations of human rights abuses in the war-torn region, the official news agency said Monday.

The Rapid Support Forces (RSF) arrested Musa Hilal, a former aide to President Omar al-Bashir, near his hometown of Mustariaha in the state of North Darfur, said State Minister of Defence Lieutenant General Ali Mohamed Salem in a statement to parliament carried by SUNA.

Mohamed Salem said Hilal's son Habeeb was also detained, but did not specify when exactly the arrests took place.

"They were arrested after clashes in the area but the security situation there is now stable," Mohamed Salem said. "They will soon be brought to Khartoum."

On Sunday, fierce fighting erupted between fighters loyal to Hilal and an RSF unit near Mustariaha, in which the RSF said it lost 10 members including a commander.

Mustariaha is the hometown and bastion of Hilal, whose fighters from the Arab Mahamid tribe have regularly clashed with RSF troops in Darfur in recent months.

The fighting Sunday had erupted when an RSF unit was ambushed as it oversaw a weapons hand-in near Mustariaha under a disarmament programme launched by the government across Darfur after it announced the conflict had ended early this year.

Darfur, a region of the size of France, has been awash with weapons since 2003, when ethnic minority rebels took up arms against Bashir's Arab-dominated government, accusing it of economic and political discrimination.

The weapons are held by tribal militias, including some backed by government forces, and authorities now want them to be surrendered.

But Hilal -- a former aide of Bashir -- and his fighters have refused to hand in their arms.

During the initial years of the conflict in Darfur, Hilal and his fighters had fought on the side of government forces against black African rebels in the region.

He is under a UN travel ban and on a list of individuals sanctioned for "human rights atrocities" during the early years of the conflict.

The UN and rights groups have accused him of attacking several villages and even displaced people's camps.

The UN and Washington say he played a key role in mobilising pro-government Arab militias that attacked black African rebels and villagers who had allegedly backed rebel groups.

Hilal denies these accusations, saying that he organised his tribesmen in order to defend their lands and properties following a call by Khartoum.

In 2008 Hilal was appointed as an adviser to Bashir, but a few years later a rift erupted between him and the government when he accused Khartoum of ignoring his political demands.

Since then, he and hundreds of his fighters have often clashed with the RSF in Darfur, threatening the recent gains achieved in the region.

The RSF also faces controversy over its role in crushing rebels in Darfur.

The region has seen an overall fall in violence in recent years, although there are regular reports of tribal clashes.

About 300,000 people have been killed and another 2.5 million displaced in the conflict since it erupted in 2003.

Bashir is wanted by the International Criminal Court on charges of genocide and war crimes related to the conflict.

He denies the charges.

Bagbin fly to Dubai for medical review after budget rejectio...
53 minutes ago