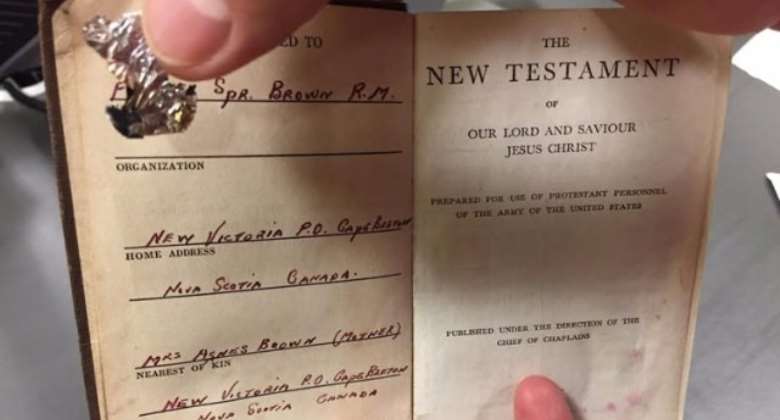 A Bible belonging to an American soldier serving in World War II has found its way back home after more than 70 years.

The pocket-sized government issue copy of the New Testament belonged to Johnie J. Duncan, of Westminster, S.C. It was contemporaneously found by another vet, Joe Bob Sparks, on a battlefield in Europe.

Sparks kept the Bible and brought it back to his home in Fort Worth, Texas, after the war. Sparks passed away in 2003 and the book was found by his nephew, Patrick Ickes, a Navy veteran himself, among his collection of memorabilia.

“I’m a Christian and I love Bibles, I really love old Bibles,” Ickes told the Florida Times Union in an interview. “I asked my aunt about it and she said, ‘Oh, your Uncle Joe found it on a battlefield in World War II.’ She might have said France, but I’m not sure.”

Ickes found this written on the inside cover: “Sunday Nov, 19, 1944. Westminster RFD 3, South Carolina. Next of kin: Mrs. J.M. Duncan.” Despite having no other clues, Ickes was determined to track down the book’s owner.

After an internet search went nowhere, Ickes sought out a his more tech-savvy sister. She got on Facebook and was able to connect with a Westminster resident with the same last name as the Bible’s owner.

It turned out to be a different Duncan, but Westminster is a small town so they soon figured out the correct connection. A month after making contact, Duncan’s son, Danny Duncan, held his father’s Bible in his hands.

Finally, details about what happened to Duncan during the war were revealed. Duncan had survived and went on to stay in the army for 26 years, retiring as a first sergeant.

He’d been wounded in the war when a grenade exploded near his head, severing one of his ears. Doctors were able to reattach it but he suffered chronic pain later in life due to the more than 50 pieces of shrapnel embedded in his neck.

The younger Duncan describes his father as a quiet, humble man who didn’t recall his war experience often. The two would fish together and occasionally the senior Duncan would open up about his time in the war.

“He did tell me once, ‘When you smell the smell of death every day, and you see no relief from it’ — well, that’s got to be pretty traumatic to an individual,” Danny told the Florida Times Union.

The senior Duncan was not a particularly religious man and never mentioned his missing book. “He read the Bible through several times and he did his own type of worship. He was a very humane person, always did the right thing as far as I know of,” says Danny.

Since receiving the Bible, Danny carries it with him in his car, “It does make me feel closer to him,” he says, “I can only imagine, when I first held it in my hands, I wondered, what has this Bible seen? It was six years before he married my mother. He was 22 years old. I know he was scared to death.”

There is one other inscription in the Bible, on the last page, that reads “Let us pray for peace.”