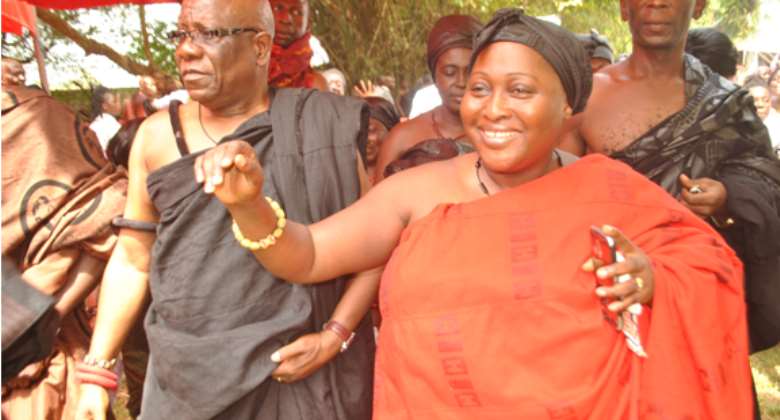 The chiefs and people of the Drobo Traditional area in the Jaman South district of the BrongAhafo region, over the weekend, celebrated the MunufieKese festival to honour their forebears.

As part of activities for the year’s celebrations, a colourful durbar of chiefs was held at the Krupiase Royal Palace in Drobo on Friday, November 17.

The event brought together the denizens of communities under the Drobo State as well as its citizens living in various parts of the country and abroad.

Owners and leaders of both formal and informal businesses operating within the area also turned out for the durbar.

The District Chief Executive of the Jaman South district, Hon. AlhajiAbuu, and the Member of Parliament (MP) for the area, Hon. Yaw Afful, as well as the Jaman South Divisional Police Commander among other personalities, were in attendance.

Hon. Samuel Awuku, the Board Chairman of the National Youth Employment Agency, in the company of the Deputy Director of the National Service Scheme and others also attended the occasion.

The pomp and pageantry at the occasion exhibited the richness of the Ghanaian traditional culture.

Lawyer Daniel korang, who read the keynote address on behalf of Lawyer Apraku, highlighted the importance of traditional leaders’ role in nation-building, saying the nation’s development would hardly be achieved without their inclusion.

He asserted that traditional rulers, unlike politicians, have an unlimited term of office, which he said, was indicative of their significance in the nation’s development.

Lawyer Korang stated that traditional authorities' involvement in the building of society had been tremendous from pre-colonial days till now, adding however that, there was the need to advance the institution of chieftaincy to further impact national growth.

He commended the chiefs for making the effort to dispense with certain customs that have been inimical to societal development over the years, encouraging them to do more to put an end to such practices.

Nana YaaAnsua, Paramount Queen mother (Omanhemaa) of the area addressing the gathering, urged them to embrace unity and patriotism towards building their communities and the country at large.

She also encouraged them to be hardworking and shun behaviours that tend to hinder the progress of society.

The Omanhemaaassured her people of her working together with the traditional council and all necessary institutions at both local and national levels, to ensure development in the area.

The festival ended with a thanksgiving service at theDroboMethodist church on Sunday, November 19.