The Heartless Defilement (Rape) of Children: Prevention is Better Than Cure 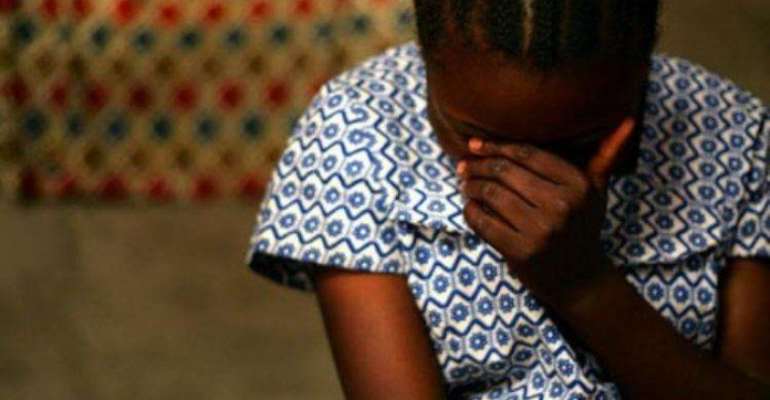 A 9-year old girl was earlier this year, defiled by a 19-year-old fisherman by name Francis Thompson in the Central Region leaving her unable to walk, bleeding and with part of her intestine hanging inside her vagina.

Again, a 4-year-old girl was defiled at Assin Adadietem in the Central Region but thanks to the gods, the perpetrator was let off the hook until the crime was exposed by Joy FM.

Need I point out that some situations cannot be left alone to correct themselves? The status quo will remain unless deliberate measures are deliberately put in place to rectify the situation.

The article gives a legal background of the criminalisation of marital rape, the situation on the ground 10 years on and then concludes with some recommendations.

I must admit, although I don't have brains for legal stuff- I had to carefully read over those parts to understand it- I find the piece insightful and worth sharing.

According to the writer, marital rape was criminalised following the repeal of section 42 (g) (of Ghana’s criminal code, 1960 (Act 29) by the Statute Revisions Act. The Section 42 (g) gave husbands the privilege to have abusive non-consensual sex with their wives. Following this repeal, marital rape is linked to the Criminal Offences Act (revised in 2007) under which marital rape is implicitly an offence in Ghana.

It is however, quite shocking to learn that 10 years after the criminalisation of marital rape on February 21 2007, there is no empirical evidence from the Domestic Violence and Victim’s Support Unit (DOVVSU) of the Ghana Police Service of any such reported case. Can you believe that? Especially after all the controversies that surrounded the passage of this particular legislation?

So does this mean that within this 10 years, no husband has had a non-consensual sexual intercourse with his wife? And if this is not the case, why has no one reported? And can we then conclude that the purpose for criminalising marital rape has been defeated? Or perhaps this is an indication that the best way of dealing with marital rape or sexual violence against women and children in general is advocacy/education and not punitive measures alone.

The crux of Mrs. Adodo-Samani’s article! The author is not bothered about the fact that wives are not reporting their sexually abusive husbands. Far from it! Bearing in mind that we don’t wash our dirty linens in public. Her concern is about nipping all forms of sexual violence: defilement, rape, sodomy, sexual harassment, indecent assault and their likes in the bud. This is possible through: relentless advocacy and formal education on sexual violence; and examinable curricular on sexual violence at all levels of education instead of the legal recourse alone, so that a rapist or prospective will know the consequence of his actions.

The writer suggests the incorporation of examinable sex education in Ghana’s educational curricula at all levels. Not only that, the physical education curricula should also include instructions on the recognition and prevention of sexual abuse and self defense mechanisms. Furthermore, government approved textbooks should have teasers of sexual abuse recognition and prevention at the back just as mathematical tables are found at the back of some exercise books.

I find these recommendations laudable because education is a powerful tool for change. From pre-school onwards, we must know that sexual violence is an anathema! Or how else can one make a tertiary student realise that the defilement of a 4-year-old girl is not as a result of the way older females dress but rather as a result of the inability of some men to control their libidos? Or absolute insanity!

Yes, every society has a perception of the ideal way of doing things including dressing. But truth be told, we don't live in an ideal world.

Hearing comments like this from people you consider enlightened or exposed and should know better is rather disheartening.

It's about time we start re-orienting our people concerning perpetrating sexual violence against the vulnerable in society before it's too late.

When children especially boys are taught from an early age that sexual violence is a crime, they will not grow up to rape their wives let alone defile a child. And I believe implementing the recommendations of this writer is a good way to start.

After all, incorporating sex education in the educational curricula and printing sexual abuse and recognition teasers at the back of government-approved textbooks won't cost that much.