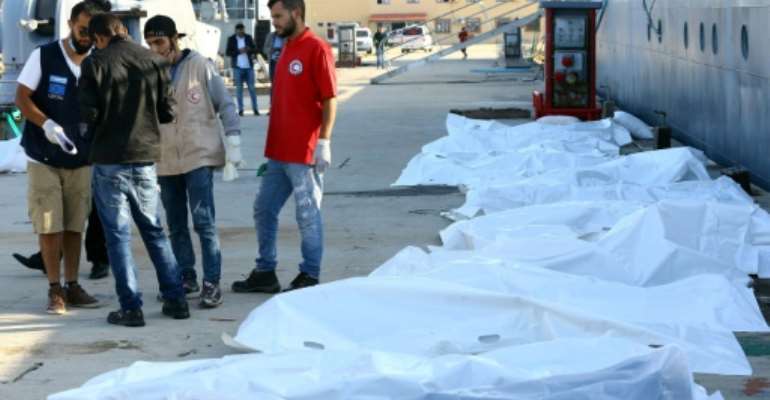 Libyan paramedics and aid workers stand next to the bodies of African migrants at a naval base in Tripoli on November 25, 2017, after more than 30 migrants died off the coast of Garabulli, 60 kilometres (40 miles) east of the capital. By MAHMUD TURKIA (AFP)

More than 30 migrants died and 200 were rescued on Saturday after their boats foundered off Libya's western coast, the Libyan navy said.

"When we arrived at the spot, we found an inflatable dinghy with several people clinging to part of it," he said.

He did not specify whether any migrants were missing.

"The weather conditions these days are favourable for sending migrants to European shores on boats that are often unseaworthy," he added.

Libyan patrol boat commander Nasser al-Ghammoudi said one of the migrants' vessels was three-quarters under water when the coastguard arrived.

"We looked for other survivors for more than five hours," he said. "We were able to rescue one woman after we heard her shouts."

The survivors were brought back to a naval base in Tripoli where the authorities provided them with water, food and medical care.

Migrants intercepted or rescued by the Libyan coastguard are usually held in detention centres to await repatriation, but waiting times are often long and conditions deplorable.