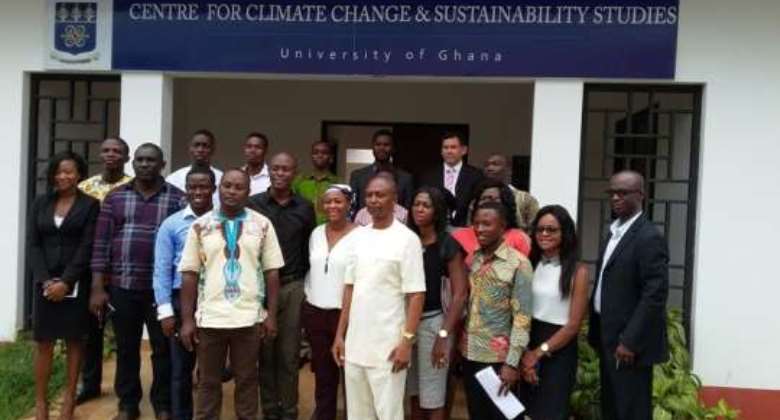 The First Biennial Conference to seek ideas of researchers and stakeholders in the mining sector on how best to effectively deal with the negative aspects of artisanal mining has been held in Accra.

The two-day Conference organised by the University of Ghana Mining Research Group (UGMiningRG) and the Centre for Climate Change and Sustainability Studies (C3SS) brought together researchers, stakeholders and the Ghana National Association of Small Scale Miners to brainstorm on measures to curb the menace.

It was on the theme: 'Engaging the Artisanal Mining Industry in Ghana: Practical Ideas towards Sustainable Livelihoods and Ecological Stability.'

Dr Erasmus Owusu, the Director for Centre Climate Change and Sustainable Studies, in his opening address said the broad objective of the UGMiningRG is captured in the acronym, STIMULATE: Solutions Targeting Illegal Mining Using Legislation, Appropriate Technology and Education.

He said artisanal mining activities has led to a significant destruction of the environment.

He said the shift from the use of rudimentary tools to capital intensive earth moving machines as well as an increase in the influx of migrants into the sector has led to an intensification in the scale of environmental degradation to such an extent that Ghana's agriculture and water bodies are on the verge of being laid waste.

He said the looming danger posed to national life, as a result, led to an expression of public outrage against illegal mining activities and a call for it to be stopped.

'In reaction to this, government, with a history of unsuccessful attempts at disrupting galamsey activities, has commissioned yet, the Multilateral Mining Integrated Project (MMIP) to serve as a comprehensive strategy and a guide to interventions to curb illegal mining.

'It is against this background of increased national determination to stop galamsey that the UGMiningRG, made up of 70 scholars, with different academic credentials and with the support of the C3SS has responded to the need of the times, in an effort to contribute its quota in the search for long-term research solutions to the damaging effects of artisanal mining activities.'

Evangelist Collins Osei Kusi, the President of the Ghana National Association of Small Scale Miners said the association was committed to supporting government in its quest to halt the situation.

He said the small scale miners have paid for the processes to acquire licenses to work legally, which distinguishes them from the illegal miners and called on government to lift the ban to enable them (small scale miners) to work.

He said the Association has its taskforce willing to support government to eradicate the canker.

Participants were taken through topics including: Socio-Economic Dimensions of Small Scale Gold Mining in Ghana, Mining, Mining and the Welfare of Ghanaians in Colonial Ghana and Examining Community Vulnerability to Socio-Economic Hazards from Small-Scale Mining in the Atiwa District of Ghana.