Moroccans pray for rain as 'mercy from God' 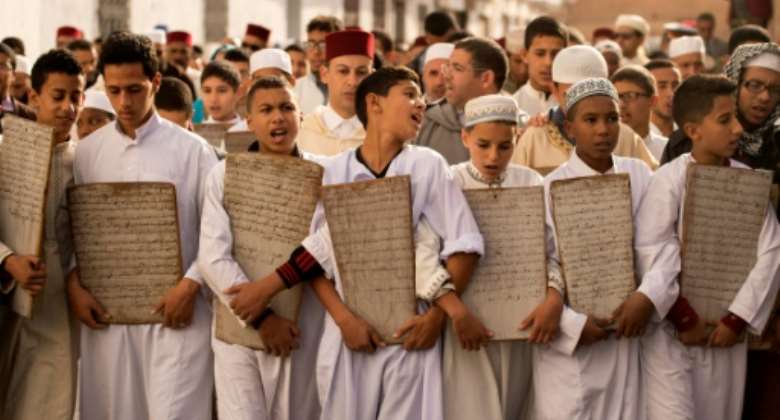 Children head to the Great Mosque of Sale near the Moroccan capital to pray for rain. By FADEL SENNA (AFP)

"We beg for God's mercy," said 10-year-old Hassan, wearing a long white tunic, as Moroccans across the parched country on Friday held prayers for rain under a royal decree.

The faithful gathered in Sale, opposite the capital Rabat, to take part in the ancient tradition.

"People pray to call for God's mercy and pardon. The Prophet (Mohammed) and his companions would pray for rain every time it became scarce," said Mohamed Boutarbouch, head of the ulema Muslim scholars of Sale who organised the event.

Hassan was one of the children who took part in a march to the coastal city's Great Mosque, as women watched from balconies on the route.

The ulema, preachers, officials and ordinary worshippers formed part of the procession held under a sunny sky.

"This prayer takes place when there is a shortage of rain and the worshippers of God need his clemency," said Badr Mohieddine from Morocco's ministry of Islamic affairs, wearing a red turban.

Like its Iberian neighbours to the north, Portugal and Spain, Morocco has suffered a severe shortage of rainfall since the end of the summer.

Moroccan university studies show that temperatures have risen by up to 4 degrees Celsius since the 1960s and annual rainfall has been on the decline.

The drought has hit cereal production this season and could force the country of 35 million inhabitants to resort to imports.

King Mohammed VI, in his official capacity as "commander of the faithful", called for prayers in all Moroccan mosques "to implore the Almighty to spread his benevolent rains on the earth", the ministry of Islamic affairs said.

The weather has become a major topic of conversation across the country, 40 percent of whose population depend on agriculture for their livelihood and where the sector accounts for more than 15 percent of GDP.

"It's too early to speak of drought. But if there's no rainfall by mid-December, the situation will turn critical," an agriculture ministry official said, speaking on condition of anonymity.

On top of the scarcity of rainfall, aquifers have been overexploited for agriculture.

According to local media, royal police aircraft plan to seed clouds with salt crystals in an effort to induce rainfall artificially.

'Captain Smart arrest is intolerance, he did no wrong' – Med...
43 minutes ago