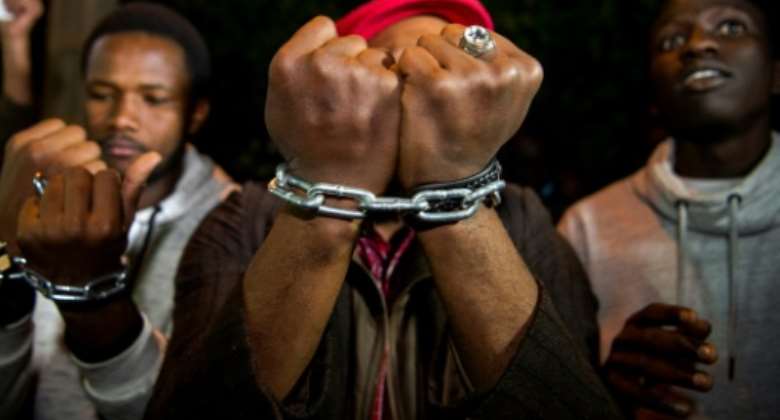 Protesters held demonstrations outside the Libyan embassy in Morocco demanding action over slave auctions in Libya. By FADEL SENNA (AFP/File)

World leaders may have been quick to voice outrage over video footage of Libyan slave auctions, but activists raised the alarm months ago -- and their warnings fell on deaf ears.

Aid workers, rights groups and analysts say they had been shouting about rape, torture and forced work for thousands of black Africans in the war-torn north African country until they were blue in the face.

But it took CNN's footage of young Africans being auctioned off near Tripoli, filmed on a hidden camera and aired on November 14, to force Western and African leaders into a flurry of condemnation.

France requested an urgent meeting of the UN Security Council, with President Emmanuel Macron branding the auctions a crime against humanity.

But NGOs and experts have charged leaders with hypocrisy.

"And we've been talking about slavery for a long time," he added.

Libya became a massive transit hub for sub-Saharan Africans setting sail for Europe after the fall of dictator Moamer Kadhafi in 2011 tipped the country into chaos.

The EU has been desperate to stem the influx -- more than 1.5 million migrants have arrived in Europe since 2015, according to UN figures.

But leaders are at a loss to find solutions for the asylum seekers on the other side of the Mediterranean.

This month it faced heavy criticism from the UN over its training of the Libyan coastguard, which the world body's rights chief said resulted in migrants being sent back to "horrific" prisons.

With EU support, Italy has been training Libyan coastguards to intercept boats as part of a controversial deal that has seen migrant arrivals down nearly 70 percent since July.

But the UN charges that the policy leaves migrants returned to Libya at risk of torture, rape, forced labour and extortion.

Brussels has hit back that its coastguard training has helped save lives -- nearly 3,000 people have died trying to cross the Mediterranean this year -- while EU aid has helped UN agencies to send 10,000 migrants home from Libya voluntarily.

In The Gambia, Karamo Keita set up a group to warn fellow youngsters not to attempt the trip to Europe, after suffering horrific abuses in Libya including slave labour.

"In Libya, black people have no right," he told AFP back in September.

"We were taken to various farms where the Libyan guy sold us as slaves. We worked on the farms for free."

The International Organization for Migration had in April reported the existence of markets where migrants became "commodities to be bought".

"In their efforts to stem the influx, are European governments ready to pay the price for rape, torture and slavery?" she asked, adding: "We can't say we didn't know about this."

Amnesty International said Europe, in its efforts to stop migrants arriving, bore "a fundamental responsibility" for the horrors in Libya

Amnesty's Tine said that in its efforts to stop migrants arriving "at all cost", Europe bore "a fundamental responsibility" for the horrors in Libya.

Yet others are also to blame, he told AFP.

"African countries do nothing to make their young people stay, to give them work," he said.

Analyst Hamidou Anne also said a passive response from African leaders was in part to blame for the unfolding disaster, along with "systematic racism in the Maghreb countries".

"Faced with a crime against humanity you don't condemn it, you act."

Tiny Rwanda has offered, since the scandal broke, to take in 30,000 Africans from Libya.

Migration commissioner Dimitris Avramopoulos meanwhile told AFP on Thursday that the EU was "working without let-up" to find solutions.

Tine said slavery needed to be on the agenda at an EU-AU summit on November 29-30 in Abidjan, an idea already floated by Niger's President Mahamadou Issoufou.

"We need an impartial investigation to see how the trafficking is organised and who is behind it," Tine said.

And, he added, "everyone must take their responsibilities."