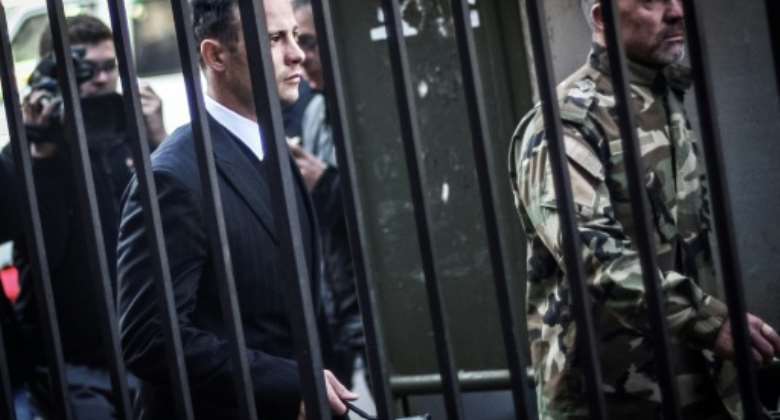 Prosecutors had argued that Pistorius failed to show genuine remorse over the killing.. By Phill Magakoe (POOL/AFP/File)

The Supreme Court of Appeal in Bloemfontein more than doubled his original sentence of six years after the state argued that it was unduly lenient.

Pistorius, 31, was not in court for the hearing.

"One of the essential ingredients of a balanced sentence is that it must reflect the seriousness of the offence," Andrea Johnson, of the National Prosecution Authority, had told the court.

Pistorius' lawyer Barry Roux mounted a strong defence of the judge who handed down the six-year sentence, saying she took into account his claim that he believed he was shooting an intruder.

The Paralympic athlete shot dead Steenkamp in the early hours of Valentine's Day in 2013 when he fired four times through the door of his bedroom toilet.

Pistorius pleaded not guilty at his trial in 2014, saying he mistook his girlfriend for a burglar.

He pleaded not guilty at his trial in 2014 and has always denied that he killed Steenkamp in a rage, saying he mistook her for a burglar.

In 2015, Pistorius was found guilty of murder and given less than half of the minimum 15 years in jail for that crime.

Pistorius was originally convicted of culpable homicide -- the equivalent of manslaughter -- but the appeal court upgraded his conviction.

'Justice has been served'

Nazreen Shaik Peremanov, a constitutional law expert at the University of South Africa's law school, told AFP that Pistorius could now appeal the latest sentence at the country's highest court -- the Constitutional Court.

But National Prosecuting Authority spokesman Luvuyo Mfaku said he was pleased with the Supreme Court's ruling.

"We always maintained as an institution that this appeal is not about an individual. It has got everything to do with the proper administration of justice," he said.

"We hope the family will find closure knowing that justice has been served and the proper sentence has been handed out."

"We have all suffered incomprehensible loss. The death of Reeva was and still is a great loss for our family too," he wrote.

Previously an ambassador for disabled people worldwide, Pistorius was released from jail in 2015 after serving one year of the initial five-year term for culpable homicide.

He returned behind bars after his conviction for murder.

In a television interview, he said he believed an intruder was in the house and "instant fear" drove him to grab his gun and walk on his stumps towards the bathroom.