Commentary: Idolatry and the Rise of the Apostate Church 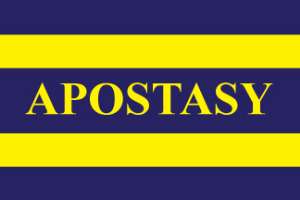 “Let no man deceive you by any means: for that day [the day of Christ’s return] shall not come, except there come a falling away [apostasy] first, and that man of sin be revealed, the son of perdition” (2 Thessalonians 2:3 KJV).

Apostasy! Apostasy! Apostasy! Everywhere one looks, if you are spiritually discerning, you will see the signs of spiritual apostasy and firm rebellion among the children of the Kingdom of Elohim (God). This was long ago prophesied by Yahweh’s holy apostles and prophets in numerous proportions within the volume that is the Word of God. Prophecy tells us that after the “falling away” takes place then the anti-Christ figure called the "son of perdition" will be revealed.

In this article, as a duty to the faithful among the house of Yisrael and the rest of Yeshua’s church, I will show that more than ever, the people of God must be wary of rebellious Christians and their unsound doctrines.

Apostasy, what is it? The English word apostasy has its origins in the Greek term apostasia. It means desertion or withdrawal. In the context of Yahweh’s Kingdom government, it refers to desertion of or leaving behind the COMMANDS of the Most High. But let us go further than just English and Greek. Consider that Yeshua’s church has been given the gift of tongues and the interpretation of tongues. And so let us explore the term apostasy further in other languages.

In the Evhe tongue of West Africa, the term for apostasy is megbɛdɛdɛ. It simply means backtracking or going backwards. In the Hebrew tongue, apostasy is meshubah. It means backsliding or turning away.

In the Kingdom sense, when one no longer lives under the authority of the Word of God and the discipline of the Ruach ha Kodesh (Holy Spirit), then such a person can be said to be moving in the direction of apostasy. Eventually if such a person does not repent and return to Yahweh, they will begin to speak and teach apostate or false doctrines that Yeshua never taught.

In this regard, a warning to God’s people comes in the form of Yeshua’s words, “And Jesus [Yeshua] said unto him, No man, having put his hand to the plough, and looking back, is fit for the kingdom of God” (Luke 9:62 KJV). So, are you really fit for the Kingdom?

The Will of God versus the Idolatry of Man The will of God is righteousness! Yeshua taught his disciples to pray after the manner of clearly stating, “…Our Father which art in heaven, Hallowed be thy name. Thy kingdom come, Thy will be done in earth, as it is in heaven” (Mattityahu/Matthew 6:9-10 KJV). The name of the Father is Yahweh! His throne resides in the headquarters of divine government: Heaven. His will or choice for heavenly and earthly government is righteousness according to His dictates. Yahweh is King! And Yeshua is Lord!

Currently, despite the lordship of Yeshua, many are in rebellion against the will of God. Naturally speaking, this is because of the experience that man has had with the spirit of Lucifer through the flimsy initiating choice of woman in the Garden of Eden. The result of this experience is that the extension of Yahweh’s government to the earth was corrupted.

Since the corruption of creation, rebellion has been the order of the day in the earth that the Father created from the beginning. As well, under the influence of a spirit other than Yahweh’s, humanity has conceived of every possible means to sustain itself materially, WITHOUT the righteousness of Yahweh. It is no wonder then that usury (or interest)—which Yahweh forbids among His people—is now the standard of conduct for the world system of economics.

When man thinks of an idea other than what God put in his spirit, these thoughts can become an idol of the mind. And whatever the mind will think, it will eventually build up and worship. Again, this is idolatry, if the thought did not come from Yahweh. The root cause of apostasy is the ability of man to think idolatrous thoughts and following from this, to seek his sustenance and material prosperity outside of Yahweh’s Kingdom order. Idolatry is what leads to apostasy.

The Signs of a True Prophet It is written, “Therefore speak unto them [the elders of Yisrael], and say unto them, Thus saith the Lord God; Every man of the house of Israel that setteth up his idols in his heart, and putteth the stumblingblock of his iniquity before his face, and cometh to the prophet; I the Lord will answer him that cometh according to the multitude of his idols; That I may take the house of Israel in their own heart, because they are all estranged from me through their idols” (Yechezqel/Ezekiel 14:4-5 KJV).

The prophet Ezekiel was a man who told his people the truth in accordance with the voice of God that spoke to and through him. He did not hide from them the very words of the Most High. And what did Yahweh address among His people when the elders of Yisrael came to enquire of the prophet? He addressed the state of their hearts FIRST before anything else. That is, Yahweh pointed to their “iniquity” or moral injustice.

A true prophet will speak God’s words and show you the state of your heart! If you are focused on anything in life more than Yahweh and His righteousness, that is idolatry. It implies that your heart isn’t right with God.

Early on in my call, the word that God constantly spoke through me to many individuals among His people dealt with their unwillingness to give Him their whole heart. Though the messages varied from individual to individual, the theme was discernable: God has a problem with His children putting His will after their own desires in life. This especially occurs when one’s labour and material wealth are not purposed for the work of the Kingdom, in obedience to the Word and the Holy Spirit.

God’s Kingdom order gave His people a way of life that provides leadership, a system of wealth distribution, and a means by which to judge unrighteousness and lawbreaking. In the eyes of many believers in Yeshua, the alternative to this is the world system.

It is easy for the children of God to see the heathen political and economic systems of the world and to assume that just because these systems practice things that Yahweh gave commands against and still prosper, then it is okay for the people of God to do the same. Not so! It is written, “Be not thou envious against evil men, neither desire to be with them” (Mishlei/Proverbs 24:1 KJV).

Many former believers in Yeshua have learned the customs of the heathen and have become idolaters that lust after worldly possessions instead of righteousness. The more God’s people do this, the more others (of the Kingdom and the world) will assume that this is the standard of the Kingdom. However, it is not. Rather, this is apostasy or rebellion against the righteous principles of divine government. Come out from among the heathen order my people, and be separate! Amen.

The author is a professional designer and communications specialist. He writes on contemporary issues of faith, science, politics, economics, righteousness and reason in the church and beyond.