A ray of hope for Zimbabwe's ruined economy? 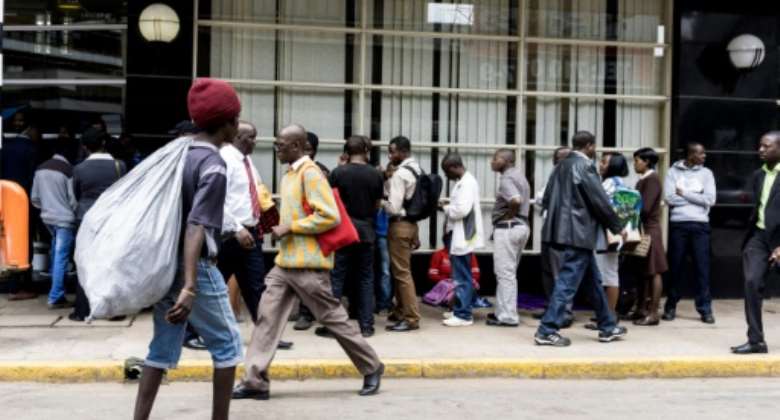 Due to Zimbabwe's crippling cash shortage, banks limit withdrawals meaning that long queues of people waiting outside are a common sight. By ZINYANGE AUNTONY (AFP/File)

Every time Chareka Mutungwazi, 76, tries to collect his pension money, he spends the night, like scores of others, sleeping outside a bank in Harare, the Zimbabwean capital.

He is lucky if he is allowed to take out just $20 of his monthly $63 (53 euros) pension as banks limit withdrawals due to the cash shortage -- a symptom of the country's economic collapse.

For most Zimbabweans, incoming president Emmerson Mnangagwa has only one priority: rebuilding an economy shattered by policies that threw out investors, destroyed the key agricultural sector and left almost everyone unemployed.

"I have to sleep in the queue if I want to get money. I came here last night and this is not good," Mutungwazi told AFP, wincing as he shifted to find a more comfortable position on the pavement.

Beside him in the queue at the government-owned People's Own Savings Bank, an elderly woman laid half asleep while a young mother tried to control her restless child.

The shortage of banknotes is a legacy of the hyperinflation 10 years ago that forced the government to abandon the Zimbabwean dollar.

Inflation hit 500 billion percent as the government printed one-hundred-trillion dollar bank notes that could barely buy a loaf of bread. All savings were wiped out.

To ease the crisis, Harare has introduced a parallel "bond note" currency that is pegged to the US dollar but few people trust it

Since then, the economy has survived on scarce US dollar notes -- often used until they fall apart -- and for the past year a parallel "bond note" currency that is pegged to the US dollar but widely distrusted.

The World Bank estimates that 2.8 million people, or 17.5 percent of the population, are short of food, and says paying public wages sucks up a staggering 87 percent of government revenue.

Zimbabwe's unemployment level is generally put at over 90 percent, while the size of the economy has halved since 2000 when many white-owned farms were seized.

Mnangagwa addressed the unemployment crisis in his first speech as the president-in-waiting on Wednesday, saying: "We want to grow our country. We want jobs, jobs, jobs!"

Among the cheering crowd was Remigio Mutero, 30, an unemployed IT graduate. "All I want is job creation, and he has promised it," he told AFP.

Anger at bond notes was a driving force behind protests last year, while rocketing prices have returned in recent months -- adding to the pressure that finally forced the military to take over.

The country does have economic strengths, especially in tobacco, cotton and mining, and Mugabe's fall could offer the chance to open the taps for funding from overseas donors like the International Monetary Fund (IMF).

Mnangagwa -- a veteran Mugabe loyalist -- appears open to limited economic reform, including of the "indigenisation" laws that force foreign-owned companies to sell majority stakes to locals.

The IHS Markit analysis consultancy also predicted the reinstatement of former finance minister Patrick Chinamasa, saying the move "would indicate a more pro-business shift (and) re-engagement with the international community".

But local economists like Tony Hawkins, a professor at the University of Zimbabwe, warned that the country's problems run deep and international donors may not be encouraged by the new ZANU-PF regime.

"Lenders like the IMF want reforms. They will say trim the civil services, cut the wage bill. None of these can be achieved overnight," he said.

"If Mnangagwa cuts civil servants salaries, he is going to lose his support.

"We have no money in the banks, we have a huge budget deficit, there is hardly any foreign direct investment. There is no magic wand."

Many ordinary Zimbabweans, still stunned that Mugabe is no longer in power, are seizing on the chance to be more optimistic.

"We have suffered for too long," said Charles Mutimhairi, 35, who runs a stationery shop.

"Real change means creating a stable environment for new investment to bring more money and to expand companies and create jobs. We need confidence for that to be able to happen."