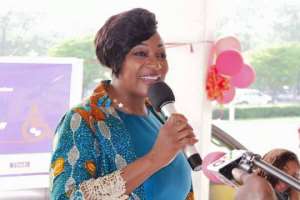 Ms Otiko Afisah Djaba, Minister of Gender, Children and Social Protection on Tuesday said the steady progress that Ghanaian women have chalked over the recent period have accelerated activities in all spheres of national development.

She said from politics, economics, commerce and industry, an increasing number of women have taken advantage of the conducive and enabling environment to develop their God-given talents and skills to participate in the development of the county.

Ms Djaba was speaking at the launch of the Gender and Development Initiative for Africa in Accra, which is on the theme: 'African Women as Leaders in Business and Politics'.

The Gender and Development Initiative is to ensure that the promotion of African Women as Leaders in Business and Politics will be a reality by 2030.

The Gender Minister said the launch in Ghana was another feather in the cap of President Nana Addo Dankwa Akufo-Addo, who has demonstrated his special acumen as a Gender and Development champion.

She also applauded the contribution of President Alpha Conde of the Republic of Guinea as the African Union Leader of Gender and Development.

Ms Djaba urged and challenged all African Leaders to work towards increasing gender equity across the continent.

She said with tenacity, women representation in Ghana's Parliament had grown from below 24 to 37; increased women presence in the Executive Branch; and the leading roles women were playing both at the Office of the President and the Judiciary.

'For the first time in our history, Ghana has a female Chief of Staff, former and immediate female Chief Justices, and a former female Speaker of Parliament,' she said.

Ms Djaba said President Akufo-Addo government's unique breakthrough initiatives such as the Free SHS programme, One District-One Factory, Planting for Food and Jobs, One Village-One Dam provide a ladder to escape from poverty and deprivation for women who have always formed a disproportionate percentage of the vulnerable in our society.

This, she said, was to empower citizens who contributed meaningfully to their own development and as effective partners in nation building.

The Gender Minister noted that in spite of these prominent and profound life-changing initiatives, there were still gaps, and that Ghana recognized and embrace the objectives and goals of the Gender and Development Initiative for Africa by President Akufo-Addo.

She said Ghana acknowledged that women still had a long way to go to achieve the equality and equity that will guarantee the harmony and advancement that the country needed to achieve social upliftment and full inclusion to enable government not to leave anybody out or behind.

Ms Djaba said the Ministry of Gender, on behalf of all girls and women, seizes the opportunity to pledge its total commitment, unalloyed and relentless support for the Gender and Development Initiatives.

She said the Government through the Gender Ministry had increased women beneficiaries of the Livelihood Empowerment Against Poverty (LEAP) to 54 per cent.

The Minister said 1,000 LEAP beneficiaries' specifically pregnant and or lactating mothers with children under one year would be provided with skills training and start-ups to improve upon their consumption.

Female Genital Mutilation, Fistula and Breast Cancer victims were also being identified for the new LEAP, she said.

She said the Ministry would launch the 'HeforShe' Campaign this December to garner the support of males for more effective gender equity.

The Draft Affirmative Action Bill has been sent to the Attorney General's Office to be prepared for Cabinet Approval and submission to Parliament before it rises this December.

'The Domestic Violence Secretariat is also embarking on 16-days of Activism Against Gender Based Violence from November 25 to December 10, 2017.

The Gender Ministry will continue to provide aggressive advocacy initiatives that were grassroots based to contribute further to the advancement of females and children to reduce and eliminate abuse and violence against women.